Midway through our tour we received an email from Jade from a local Chinese Immigrant family group based in Richmond, on the outskirts of Vancouver. This confirmed our fourth stop in Vancouver, which would be sandwiched between a first-time community Pop-Up at Slocan Park in East Vancouver and a screening of The Land and Project Wild Thing a couple of days later.

We arrived at Burkeville Park to find a pile of loose parts, with a sign that read “Pop-Up Adventure Playground – Do not throw away”. We started to unpack the materials while a handful of children honed in from the outskirts to find out what was going on. “Can we play?”

“Of course!” we replied “You can do whatever you like with all the things we have,” Suzanna informed them. Before she had finished her sentence the children were instinctively gathering their supplies ready to commence in their play.

Soon after, more and more families began to arrive. Some brought boxes, others set up camp with picnics while others hovered on the outskirts waiting for instruction. “What do we do?” one of the parents hesitantly asked “You can use all the materials in whatever way you please” I said. The parent looked somewhat baffled but headed off back to her waiting child to relay the instruction.

I started to build up a box, taping the bottom. A child quickly approached me “What are you doing?” he said. “Ermmm, I’m not really sure, I’m a little tired, maybe it could be a bed”. So that’s what I did, I climbed into the box and closed the lid, which I quickly regretted in the 30 degree sun. Instantly I was swarmed upon by several children, some tapping the box, others holding the lid closed whilst another made use of a gap and made the inside of my chamber smell particularly interesting! 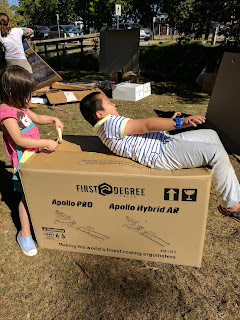 After the initial ‘pile on’ I quickly left the scene, but left behind a box that had been injected with life, a narrative, which continued, changed and transformed before its final resting place became the foundations of a majestic looking fort.

Throughout the session families were heavily involved in their children’s play, but for some, this was the first time they, as adults, had played for as long as they could recall. Some of the children proceeded in their play without hesitation while some hovered and repeatedly asked for permission and thanked us each and every time. A few conversations took place that started “Some of these kids don’t know how to play” but they quickly found that this wasn’t the case. Players need practice.

As always, the play blossomed in so many beautiful directions. ‘Under Construction’ signs were made and then passed between children once jobs were complete. Forts were built with varying sizes and styles of architecture. Acorns and pebbles were counted out into cupcake molds and a mass smashing and trashing session was enjoyed by many during clear up. 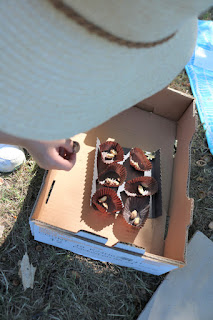 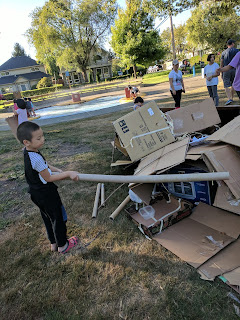 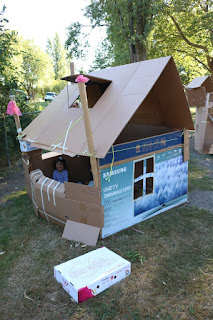 Families left reluctantly. Deserting their structures with lingering regret. Some children forced their parents to take home their inventions while others asked when the next one would be.

This was a fantastic first Pop-Up and the start of many more to come.