Reaching the 6th country on this epic world tour felt a little bit like going home. I had somehow forgotten that simply going to “see my family” in Hong Kong also meant that 8 people would come and pick us up at the airport, and that tiny cousins would invite themselves into our room to chat incoherently but enthusiastically about their day. This was play infiltration at it’s core: working your way into community so seamlessly that it takes people a few moments to realise that you are visitors invited into a space. Clearly, I had traveled halfway round the world to come home.

And such plans we had for my HK home! After a few days of rest and tourism, we had two consecutive days of Pop-Ups! One of them was right in the heart of the village, on the road, in between rows of residential homes. With the help of my extended family, we set up an abundant Pop-Up Adventure Playground which saw around 80 folks come through. Here are some pics: 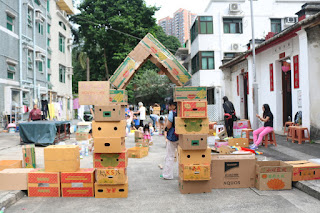 My cousins made an archway to draw attention to our event. 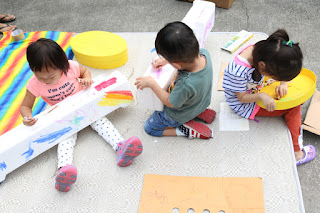 Somebody donated a mattress, and the children really enjoyed hanging out on it. 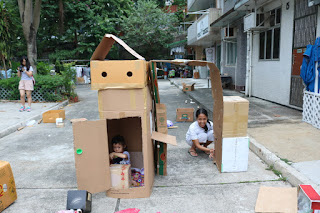 The maids were the real stars of the show – they really enjoyed constructing houses to start the play and then gracefully stepped back as the children joined in. They were amazing. 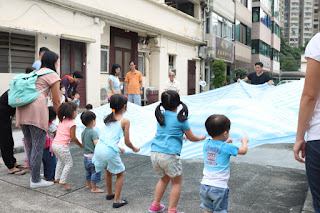 The grand finale happened when we brought out a giant tarpaulin and everyone joined in with the waving, rustling and bouncing of things.
We were also really pleased to be able to connect with Louise and Lily who had been working in mainland China and came to visit us in Hong Kong for the day. They were able to connect with Playright who also popped by for a visit and we all talked excitedly about play in Hong Kong – such passionate people here! Interest in play is growing in HK and we were excited to hear about it!
On the second day, we popped up at my family’s church. The congregation had collected a load of loose parts together for us and it was amazing to find an old rice cooker, some old fashioned mop heads and novelty Christmas baubles donated to play. The play was explosive, and almost deafening at points inside the church hall, but it soon leveled out into some pretty intensive play. Here are some photos: 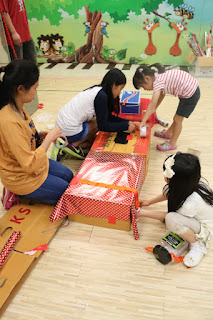 This was a train. 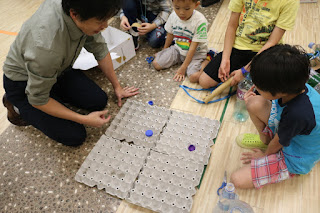 This parent invented a game with his kid – it involved rock paper scissors then the bottle caps moved. They really got into it and when the winner was declared they cheered! 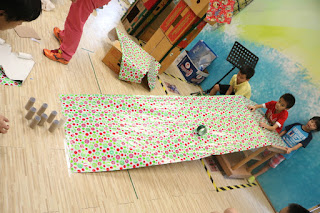 Some inventive bowling was happening here. 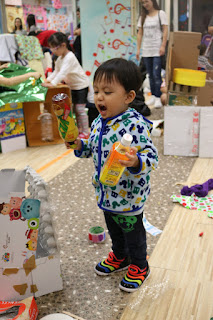 This is my favourite memory. This little boy pulled the most expressive faces as an impromptu drum circle formed. The louder people played, the more excited his face would become! This happened for roughly 20 minutes before he decided finally that he wanted to make some noise too.