I will admit that I cried.

Just short of 150 people had indicated that they were “interested” in coming to my pop-up adventure playground, which I was hosting as part of a food night with Farrars Cafe and Tea Rooms at Radcliffe Market Hall. I knew it would be popular, but looking at numbers a couple of hours before the pop-up, I hadn’t imagined that it would be that popular. I had only arranged to have Pop-Ups PDC tutor David support me during this event but all of a sudden it dawned on me that we would need more help. And then the tears came.

Luckily I was able to recruit my family to help – my dad and sister-in-law popped down to help us out and it was so necessary too! The market hall was huge and 55 children came along – that means that there were at least another 50 adults present too! The hall was filled with the sound of playing children, the voices of merry adults, and the smells of wonderful food. There were plenty of loose parts to go around too so all was well. Here are some photos of what they got up to: 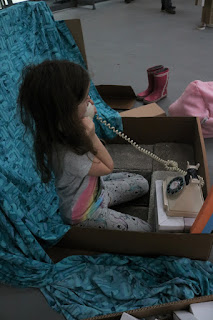 Making a call in a boat. That’s what everyone needs. 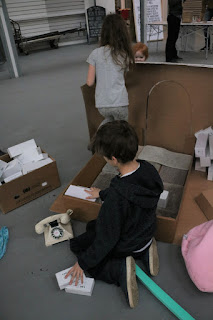 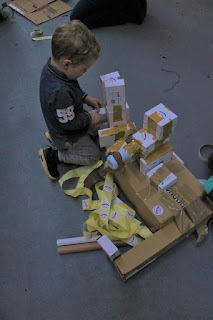 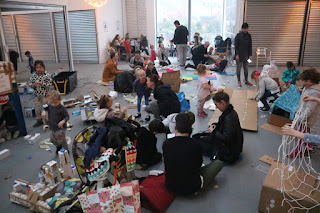 Here are all the people. I was so glad to have the support of Pop-Ups PDC tutor David, my dad and my sister-in-law. 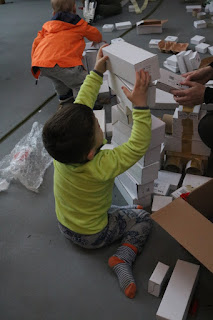 The large donation of tiny boxes were really popular!

About an hour into our 3-hour pop-up, the fire alarm went off. By this time, I was on my toes and ready for action. People were naturally confused, and a couple of people left immediately. I checked to see what was happening and it turns out someone had boiled a kettle underneath a smoke detector, setting off the alarm and then there didn’t seem to be a way of switching it off. It didn’t affect the play too much – the children didn’t seem to notice the incessant beeping – but the adults were ruffled. A team of firemen rocked up and stood around for ages, pointing and talking seriously while looking at some doors. It turned out that the several fire doors were locked shut and the firemen were very upset about this. I was annoyed with myself too – I should have checked about the doors as part of my pre-play risk assessments, but because I knew there were 2 doors available, I didn’t check the remaining fire doors! That’s a mistake I won’t be making again! Eventually the firemen recommended that we should wind down for the night. Adults filtered out with their children gradually, waving goodbye as they went and at about 8pm, our pop-up adventure playground suddenly went still. We quietly tidied up, grateful in the moment that the air was still.

There was a lot of people and unexpected things happened, but I really enjoyed this pop-up! The community was warm and supportive of the work, and asked over and over again when we would be back again. The next one has already been arranged and word is spreading – there’s food and play! It’s so wonderful to be popping up in my own community, and I am so thankful to Farrar’s Cafe and Tea Rooms for the opportunity!