Reflections from the Playwork Campference: Part 3

The five of us sat smiling at one another as we reaffirmed for the umpteenth time that organising our first-ever conference would be a fabulous idea. It was a year before the proposed date and our many play connections combined with our passion for play could only mean that this was going to be an amazing event. Shortly after we coined the phrase “Playwork Campference” (all credit to Jeremiah!) I had a rush of affection for the other four organisers: this would be our Campference, and we were going to do the best job we possibly could. 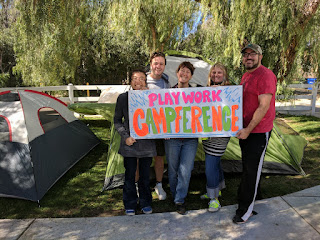 And here are the Campference organisers (left to right):
Suzanna Law, Andy Hinchcliffe, Morgan Leichter-Saxby, Erica Larsen-Dockray and Jeremiah Dockray. Team Pop-Up Adventure Play meets Team Santa Clarita Valley Adventure Play!
Having had email correspondence with at least 90% of the folks who attended our Campference, welcoming everyone on the first day felt simply like I was greeting a whole bunch of friends. Every warm hug that gave was reciprocated in earnest and felt like a genuine moment of connection rather than the frivolous greeting we often give to people without much meaning. Though I had never personally met at least 50 of the 90 people who came to our Campference, I definitely felt like I was welcoming them home – to both an amazing adventure play space, and to the community of play advocates who were just as eager to connect.
The rest of the Campference seems like a joyous blur: there was fireside play where the children discovered and came to respect the fire pit; there was the meeting of minds and collision of amazing ideas; there were torrential rainfall and people dancing in rivers where there were once streets; there were revelations, and stories of transformation, discovery and joy; there was a palpable feeling of hope and passion within our campsite that no amount of literal stormy weather could shake.
At the end of the Campference, I stood still for a moment to take in some of my own feelings. This may have started up as a conference – a convergence of 5 minds – eventually became was the meeting of 90 minds, all open and willing to experience more about the flexibility of playwork. I have never met a group of people who were so willing to roll with the changes that we had to make throughout the Campference because of adverse weather.
This Campference may have started with just 5 of us, but by the end, we could feel a shift towards all the folks who were present. It was an event that all 90 of us could take ownership of. It was our Campference, and I must thank every single person who came, and everyone who helped because these were the people who made it what it was. 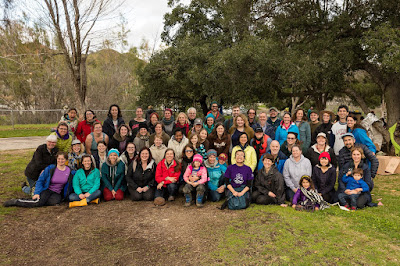 Here we all are – our group photo at our Playwork Campference.
This is the final reflective piece about the Playwork Campference from Team Pop-Ups – part 1 and part 2 are also available. Follow our adventures on Facebook and Twitter, and check out our website for more.