Sitting in my seat next to Andy, I felt really excited. I hadn’t thought about the set for Junkyard the Musical and now that I was looking at the silhouette of it on the stage before the show. It had real pallets, and barrels, and planks and rope… everything you’d find on a real adventure playground. Whatever would happen in the next 2 hours wouldn’t matter too much – it was already awesome. 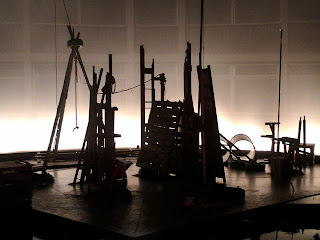 Before the show – we were sat in front and centre and I was so pleased!

As the stage went dark and we journeyed with the characters through the ups and downs of adventure playground development, I was really swept up in the energy of the whole thing. Everything was done simply but effectively with junk materials or loose parts – even some of the instruments used to accompany the sometimes moving, sometimes hilarious songs were also made out of junk! I loved particularly that characters weren’t too precious about the set, but at the same time loved it, just like the children at any AP would be too. With there being multi-level movable platforms, the space was always filled with interest throughout the show, and used very thoughtfully too for musical numbers and emotive scenes.

I was particularly amused to find that they had managed to work a whole lot of adventure playground history into this musical, doing a little bit of gentle AP promo for the field. I wondered aloud to Andy half way through the show if the actors knew what the term “playworker” was. It wasn’t mentioned in the show – being set in the 70s, the term wasn’t properly used yet – but I wonder how much they would have translated some of these thoughts for the audience of today. I was really glad to hear the parting thoughts from the cast which spoke loudly of adventure playgrounds in the UK – even a nod to Plas Madoc, the closest AP to the theatre – and I was buoyed by the enthusiasm they had brought to the auditorium. There was a palpable feeling of possibility, and the last time I felt that was when I was sat under a canopy of advertisements in the middle of California.

I truly enjoyed Junkyard to the very core of my playworker being. There was enough humour in there to keep it light, but all the emotions necessary for folks to understand just how serious adventure playgrounds are with a good sprinkling of song. Now we just need everyone everywhere to watch this show and then visit an adventure playground in action. Hoorah for Junkyard!