Although we are both British, Fraser and I actually met in Atlanta, Georgia at the IPA/TASP conference in 2010. I presented about playrangers and he was one of the people who joined my audience. Soon after, I enrolled at Leeds Beckett University to study Playwork as a Bachelors degree where I graduated with honours before transitioning to doing a PhD under the newly appointed Professor Fraser Brown. He is the Director of Studies for both Morgan and I for our part time PhDs.

Fraser has been in the field for 40 years now, and is responsible for some excellent publications. The most recent of these is Play and Playwork: 101 Stories of Children Playing, which is filled with great stories – both Morgan and I have pieces in there too!

The only Professor of Playwork in the world, Professor Fraser Brown spoke at the first ever Playwork Campference, back in 2017.

Here’s a little interview we did with Fraser. He’s one person you would like to talk to about play, in person!

Pop-Up Adventure Play: What to you is the essence of playwork?
Professor Fraser Brown: In the book ‘Play and Playwork: 101 Stories of Children Playing’ I suggested playwork is essentially concerned with:
~ creating play opportunities that enable children to pursue their own play agendas
~ enriching the child’s world by providing opportunities for experimentation and exploration
~ creating environments that address the negative effects of play deprivation and play bias
~ developing appropriate responses for individual children’s play cues
~ facilitating opportunities for children to develop a sense of self
~ introducing flexibility and adaptability into play environments in order to enhance the prospects of children achieving their full potential

PUAP: What advice can you give to those who are new to play advocacy?
FB: Don’t be disheartened by cynical people. They’ve either forgotten what it meant to play as a child, or even worse they didn’t actually get to play!  Try to be a ‘good enough’ advocate. You don’t have to change the World – just a few people will do.  If everyone managed to get five or six people interested, we’d soon change things. It’s a good idea to have a couple of easy to remember sentences that sum up what you think is important. Most people won’t dismiss you, if you’re making sense, and every now and then you’ll meet someone whose interest is sparked, and then you can get into a proper discussion.

PUAP: Finally, on a day to day basis, how do you play?
FB: I try to find fun in everything I do. 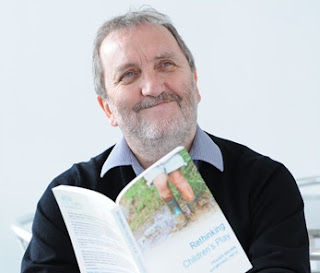 Here is Fraser, promoting another one of his books Rethinking Children’s Play.