The ladies at Chapter Zero warmly welcomed Pop-Ups Zan to Singapore when she visited in June 2016. They have since joined the Playworker Development Course and are trying their hand at putting theory into practice. Here is an account of their first ever pop-up!

We were very excited when presented with the opportunity by the Singapore Wellness Association to take up Baghdad street which is located in the heart of Singapore’s Arab Quarters, one of the most vibrant and atmospheric pockets of old Singapore. So on Saturday, 6 August 2016, the length of Baghdad Street was closed and we kicked off Singapore’s very first Pop-Up Adventure Playground on the city’s streets!

Here is our account of how we got ready and what happened on the day of the event itself.

A few weeks before the Pop-Up, we received the resource pack from Pop-Up Adventure Play and we came up with a list of materials / loose parts that we wanted to use. And so our search began! Between the things we found in our homes, the items donated by a few friends and whatever we were able to salvage during a dumpster-diving run to one of the industrial areas, we felt like we had a pretty decent collection of “junk” ready to be played with.

We also decided to invest in a few things that we thought might be useful in the future Pop-Ups, such as aprons for our team, kid-safe scissors, plastic chains and some rope. All came in very handy!

On the day of the Pop-Up, we loaded up our rented van with all the things we had sourced, and set out to play! We arrived about an hour before the start of the event and after unloading, we proceeded to get the street ready for the children. Our plan was to have a dry and a wet area, and so we separated the materials between the two and with the help of our volunteers started setting up the environment. We built a simple tepee with some long cardboard rolls and tape, and a little “fort” with two wooden pallets, but otherwise left the material as they were for the children to work their magic.

Before we knew it, people were arriving and children were rummaging through all the stuff. As the play progressed, some tourists who were passing by stopped us (we were identifiable by our aprons!) to learn more about what the event was all about, and some families who were enjoying the cafes and restaurants flanking the street started joining in the play! At one point, the Pop-Up generated a crowd, we estimate, of close to one hundred people, with children making more than half the number.

Much to our surprise and delight, things proceeded smoothly from here on. The children didn’t need any encouragement and were absolutely thrilled with all the loose parts they could find on the street. And parents were happy to just stay on the sidelines and let the little ones play.

We had the privilege of watching the children unleash their creativity, playing with the materials in ways we never imagined. The plastic chains were a great hit, with children swinging and swirling them about, making waves by hitting them against the ground, and then holding the chain out at both ends so that other children could jump over it. Some children also used kitchen tongs and sticks to “cook” the plastic chain “noodles”. A long cylindrical plastic map storage tube was at first kicked about, and chased after, stood at one end to have rubber rings thrown at before being kicked or whacked down with a cardboard tube, and eventually used by children for log-rolling! It was exhilarating watching the children fashioning the material into things they could drag, fling around, climb in and out of, stomp on, roll about and even paint on.

About an hour into the Pop-Up we had an unpleasant surprise (or as we later realised – a blessing in disguise), it started to RAIN! And we are not talking here about a small drizzle, it was a proper heavy downpour – just what one would expect in Singapore. We did a quick team meeting and decided that since so many families stayed on, we should carry on. But we were clear that in order to keep the play going, we had to set a good example and so we did…

It didn’t take long for more children to join in. Some with umbrellas and waterproof jackets, others opting to get soaked – they all found a way to make the most of it. 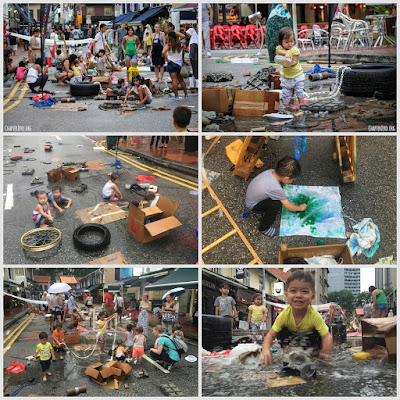 The show must go on!

As the rain started to die down, the street filled up with people yet again. We witnessed some of the best play we have seen in a long time, with children jumping up and down the puddles and re-purposing the soaked materials. It was such a joy to watch and we couldn’t have been happier with how things turned around despite the rain! Some parents even commented, from watching the children play, that the rain actually made the event even more interesting and added more layers to the possibilities for play.

We had been out in the street since 4pm and it didn’t start to clear until around 7pm. There were children who didn’t want to leave, and we were sad that we had to end their play as we had the street only until 7:30pm. We started packing up and cleaning, with plenty of help from the parents and children who stayed behind.

Afterwards, we received a gush of appreciation and acknowledgement from the parents who had been there. It touched our hearts getting such positive and encouraging feedback, and fuels our desire to set up more Pop-Up Adventure Playgrounds in the near future!

To host your very own pop-up adventure playground, register for your free resource pack here. To talk to us about our work and have a collaboration of your own, get in touch with us! More info about us can be found on our Facebook page or our website www.popupadventureplay.org.