I stepped into the large downstairs hall and looked around. This is a hall that I am very familiar with, that has regular sessions with different groups, and is the community hub with multiple users. Very briefly I felt daft doing a visual risk assessment of the space, but when I realised that someone was watching me, I made it more intentional. Doing a risk assessment is, of course, an important part of the role of a playworker.

Inspection over, I brought in my loose parts. I had been carefully packing all of this stuff over the last couple of days to meet the needs of the younger audience that I was told to expect. My open-ended play items included:

My volunteers at this Co-operative Local Community Fund sponsored event included Mildred – a friend from church, David – Pop-Up Adventure Play’s PDC tutor and good friend of mine, my dad – who happened not to be busy that day, and Mildred’s friend. Many of my worlds had been brought together for this event.

Some of the children arrived early but we invited them in to play anyway. “Set up” at a pop-up is a term used loosely here – as long as risk assessments are complete, all the loose parts are available, and adults have been briefed in basic playwork ideas, then the session can start. On this occasion, children had gathered hesitantly by the door, and the parents seemed expectant.

“Hello everyone” I said cheerfully “I have lots of things in the room next door for you to have a look at and play with. You can do whatever you want with all of the stuff in there, and your adults are only here to help you. So whenever you are ready, please come through and take a peek”.

Some children raced through, others decided belatedly to take their coat off and dump them on their adult. Most looked excited when they saw the stuff. I could hear some parents say out loud “wow, what would you like to make?” and “Ooh, shall we build a house”. I would very quietly and firmly say “they can do whatever they want”.

After the initial buzz of activity, where the parents didn’t know what to do with themselves and the children really tried to wriggle free from apprehensive adults, I realised that the space felt suddenly free. The parents had discovered that tea and coffee were a possibility and had sat themselves down on the chairs surrounding the loose parts, chatting. Some responded to kids when asked. Others just sat and observed their child, doing a running commentary under their breath. Generally, I saw smiles. I had a moment to go over and say hello, and asked the adults how they were feeling about everything:

“I am just getting ready to move house and they just want to empty my boxes all the time, but now I understand why – they want to play with my boxes! I guess I know what I’ll do with them all after we’ve moved – no need to worry about throwing them away now!”

“I used to do this with her older siblings but I haven’t done it for about 3 years because she’s the youngest and I didn’t think it was interesting. But I guess she needs it because… well, look!”

Working my way around the children as they play, I watched on the periphery what they were doing. There were dens, and cat trees, and dog beds and some general running around for no reason. One little girl, who was barely 3 years old was so pleased to be there. “I’m going on holiday” she says to me, as she packs the red wicker handbag. She visits the dens that belonged to the other children, moving in and out as she pleased. The older children didn’t mind – they almost knew that it was a temporary crossing of play frames and just played around her. Another little girl explained to me that she had made a big bad wolf. It was naughty and the biggest and baddest wolf ever. That’s until her brother made a wolf too, who was a nice wolf that put people in prison. The other wolf also became nice too – “The nicest bad wolf”. The children were having a great time. 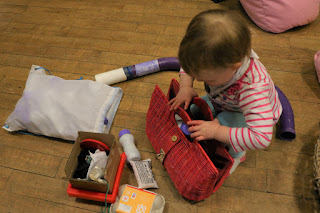 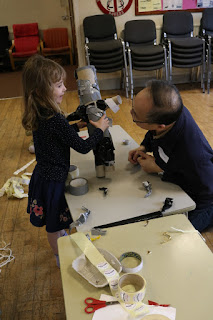 My dad with the Big Bad Wolf. 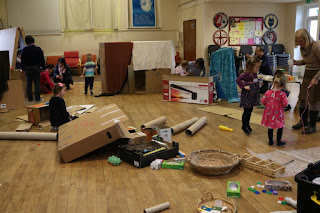 About halfway through, my little friends Hannah and Nina arrived with their mum and a friend of mine. A few minutes later, my local council representative – who happened to be my high school music teacher – also arrived to check out the event. Together with my church friends, my playwork friends and my dad in the room, this combination of people almost made my brain explode. The sheer fact that so many people who directly formed my immediate community came together because of my one pop-up made my heart sing. Every area of my life was represented here, and while my brain was having a little trouble computing this, this is exactly what a pop-up adventure playground is for: bringing people together because of play.

I think that this pop-up was super successful and I am looking forward to organising the next one in my own community.