Adventure Play on the Big Screen

By Morgan
We’re pretty convinced that adventure playgrounds are the most gorgeous ‘ugly’ places you’ll ever see.
The best ones are packed with junk such as scrap wood, piles of dirt and abandoned tires. They’ll be exposed to the elements and usually covered in a layer of mud. They can seem messy and chaotic, even a little dangerous.

To children, this makes them places of freedom and possibility – places where ‘anything might happen’, and that’s incredibly exciting. One new employee at the Ithaca Children’s Garden Hands-on-Nature Anarchy Zone in NY called the site “post-apocalyptic but, you know, in a good way”. A good adventure playground is as fertile as a compost heap and just as pretty. What becomes clear, for those lucky enough to see, is that pretty is not the point.
We all benefit from projects which guide new enthusiasts gently through these dynamic, challenging, remarkable places, and one of the best guides today is documentary filmmaker Erin Davis. Her short film The Land, filmed in Wrexham in Wales,has received considerable press and interest, as has the adventure playground it depicts. The film has been accepted to festivals like the Camden International Film Festival in Maine, and screened at public events such as last month’s Play Space. Hosted by the Community Design Collective in Philadelphia, PA, this day included a workshop introducing essential playwork practice for local educators through DVAEYC. I was honored to be a part of it, and to meet so many advocates of children’s play.
The film, unsurprisingly, cues in all sorts of conversations around risk, challenge, and children’s rights in play. Erin’s film doesn’t shy away from the realities of adventure playgrounds, and the audience watched as children built fires, used gloriously foul language, and climbed incredibly high trees. However, Erin always goes for humanity over sensationalism. She includes interviews with playwork staff, who explain their processes of risk/benefit assessment, and and how they make decisions regarding intervention. In this way, The Land accomplishes something remarkable, countering panicky reactions by focusing on the strange and eloquent beauty of children’s free play. We feel as if we know the children we follow as individuals, and come to trust both them and their playworkers. As the children swagger and tease, I heard some laughs of recognition among the crowd. We were all reminded together that childhood, and play, encompass so much more than what is nice or cute or safe. Play encompasses the full range of human experience and emotion. As playworkers, we accept that truth and so are more able to accept the children we meet as whole people, without judgment.

Afterwards, Erin and I sat side-by-side onstage and fielded questions from the audience. The obvious questions came up early, of risk and liability, staff training and building relationships with the parents. This is the second Q&A for this movie I’ve been involved in, and both times I was amazed and gratified both by the wealth of questions (how inspired people were to learn more, right away) and by their questions’ depth. People were not asking whythese places exist, they were asking howto start building more, here, today. They were looking for ways to begin, whether through pop-up adventure playgrounds or simply putting up a rope swing in their own backyards. All we had to do was highlight other places to learn more and say yes yes, always yes to getting started. Start small, make friends, keep going. 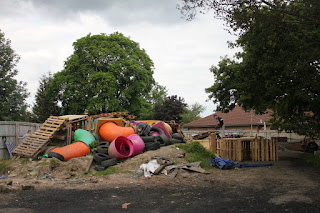 For anyone who loves play, this film is an amazing way to kick-start those conversations locally. The intimacy of this film reaches people on a gut level, showing the power of children’s play on its own terms. Audience members may extend that through their own curiosities, asking about gender dynamics or social exclusion, wondering about playwork theory of play frames or cues, reaching towards notions of adulteration and therapeutic benefits.

This, for me, is the true sign of the film’s success. Like an adventure playground, this film inspires people to each pursue their own interests, their own brand new passions, and to make friends to take those journeys with. The Land, is packed with stories and lead by the children, whose voices ring out. The only complaint I heard from viewers was that it wasn’t nearly long enough. They wanted to know more of the day, to meet more children, to see what happened later that day and the next. Like anyone who’s had a taste of real, powerful, rich play, they only wanted more.

If you want to see The Land for yourself, there’s another chance coming up next month at the Ithaca Play Symposium! Suzanna and I will be joining a range of passionate speakers focusing on all sorts of issues surrounding adventure play, and will be there as part of our Pop-Ups World Tour 2015. Click here, for more info about the Symposium, and here for more info about our Tour.