Well, we’re on the final stretch of our Grand Canadian Tour! Our last stop in BC was Surrey and included both a pop-up adventure playground and a screening of The Land. These two events were hosted by Child Care Options and gave us the chance to meet folks in quite different ways. We were able to connect with lots of local Childcare providers, some of whom knew us from our social media presence, others through Options directly, and a few more found the pop-up purely by walking past.

We also want to give a small shout-out to Gisele, who was instrumental in organizing our stop in Surrey but couldn’t be there on the day. Sharlene and the rest of the team were enthusiastic too, and we knew for certain when they told us they’d been hoarding materials for weeks, and unloading them since 6:30am that morning!

While we were getting ready, Ricky asked what it would be like at a pop-up adventure playground primarily for under-5s.

This held pretty true.  The 100 little ones toddled in and out of cardboard boxes, wobbled across wooden pallets and stared at bafflingly sticky balls of tape.  It felt pretty relaxed for us, but it was still adventurous – just on a smaller, slower scale. 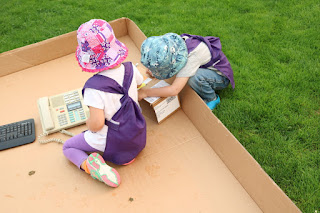 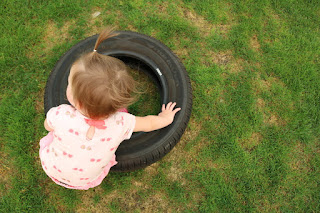 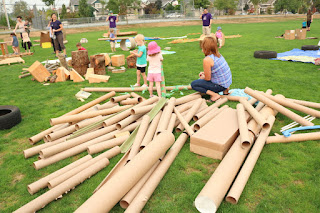 Andy said that he gave pieces of tape to one boy.  The first time it was too long for him to handle, and he cried when it got tangled, so Andy handed him a series of tiny tape pieces that slowly got bigger. Eventually, he could manage the length of tape he’d wanted in the first place.

Meanwhile, I was watching two slightly older boys smashing a cardboard box apart.  Unsure how this would be received by the rest of the crowd, I stood at the edge of their play frame to show that this was okay here.  They were laughing and practicing the language of anger, shouting “I… hate you! You stupid… box!”  This talk grew until one of them knelt down and bit the cardboard hard, then jumped up and shouted “I’ll bite you!  I’ll bite you right in the toilet!”  I turned my face away so they wouldn’t see me smile, charmed by this being the worst thing he could think to say.  About twenty feet away, Suzanna was with the boys’ mums, explaining why I was standing near the kids but not intervening.  She asked if they were comfortable with what they saw.

“If you’re cool, we’re cool, as long as they’re in sight!”  She asked if they ever felt judged in their parenting styles, and they said no – that they knew their boys were rather gentle and so felt very comfortable being more free in their boundaries.

We know that it’s been hard times in British Columbia in terms of legislation around children’s freedom to roam, but that doesn’t match what we’ve been seeing on the ground. While there are many more conversations to have around children’s rights to play, self-determination and risk, there’s also extraordinary work going on right now, to improve children’s lives across Canada.