After much organising and some epic geometrical loose parts stuffing into our cars, Pop-Ups Andy and I found ourselves in the middle of a field and under a giant tent. This would be the site of our 3-day pop-up adventure playground at the Geronimo Festival, this year held at Arley Hall, Cheshire. With our two trusty recruits, Joanne and David, we emptied our cars, staged some boxes and were away! Here are some photos of our playful long weekend: 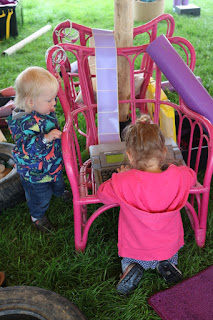 Some tiny people came to type on the computer, and stayed for a long time to explore our loose parts. 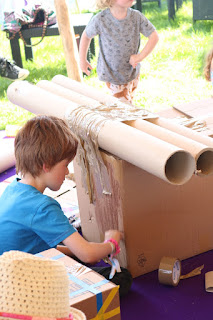 Some bigger people made some big things. Sometimes we don’t know what these things are, but it is the process that matters. 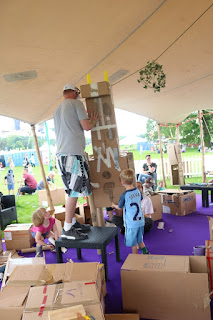 The biggest people did some playing too – this is a giraffe that was almost as tall as the tent! The children participated, but even the adults admitted that this was their giraffe and not the kid’s. 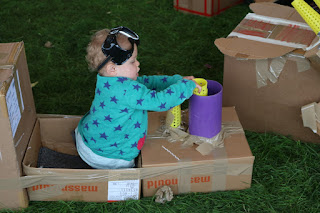 This little player spent ages in this box, putting things here and there and everywhere, dressed perfectly for the occasion. 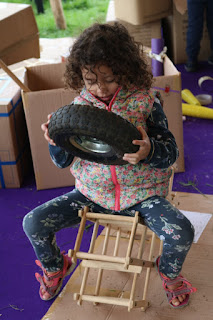 “This is a car and I am driving”. Of course, it is, and for a good few minutes too. 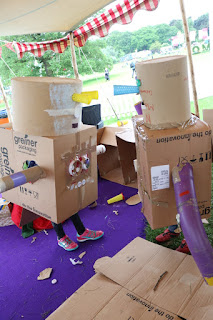 This is a set of brother, sister robots. Their parents helped a little bit but this was their idea. They may have spent a long long time dressed like this. 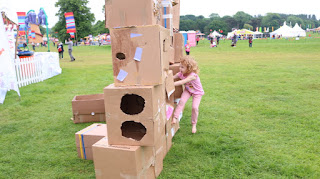 This is our box wall created at the end of the festival for children to run into and push over. It was quite a hit, with the children and the adults. It’s not often you get invited into destruction. 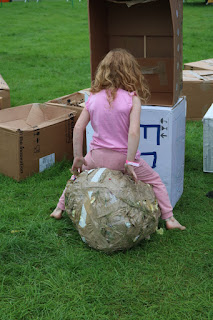 This our tape ball, so big that you could sit on it. It just goes to show that from waste things you can still make play things! 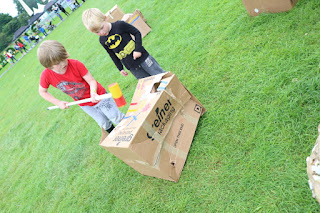 These brothers were hilarious. They were clearly tired, but really wanted to keep on playing, so they just bashed every box they could find into pulp. It must have been their way of signifying the end of the festival – their “end game” as it were. And then red one went home as a robot.

I’ll admit that when I agreed to host a Pop-Up at a children’s festival – a festival that had circus people, sheep shearers, harp players and jousters – that we would lose out and no one would come to our tent to play. It seems like I had nothing to worry about. The conversations that we overheard between parent and child always seemed to be some sort of negotiation based loosely around the fact that the children didn’t want to go anywhere else.

It was wonderful to know that child-led play was so appealing that our tent was always busy and buzzing with activity. There were so many great moments, and so many glorious opportunities for children to assert their right to play that on a few occasions, I felt a little emotional. I’m really glad we went to Geronimo, and I hope that I’ll get to pop-up there again in the future.

To see more photos from Geronimo, check out the Facebook photos. To follow the adventures of Pop-Ups Zan, visit her personal blog. To visit our website, please visit www.popupadventureplay.org.