Our First Award…… With gratitude

Sadly I wasn’t able to attend the National Playwork Conference this year having only just arrived back home from our Playwork Campference in Los Angeles. Luckily there was a live stream available allowing me to watch the awards whilst unpacking my rucksack at home. As I eagerly sat watching, my phone tentatively in my hand ready to message the team, there was a clash of glasses, a wobble of the screen and the camera ended up on the floor. There was a mad scramble to stabilize the stream with familiar faces and voices flashing on and off the screen. Hilarious! It was an amazing feeling knowing that, even though I wasn’t there, I was one of them.

The winner was announced…. Pop-Up Adventure Play – Playwork in Other Contexts Award. Wow! I couldn’t believe it. There were some fantastic organisations in the run for the award which made this announcement so overwhelming! Ali Wood accepted the award on our behalf as one of our free-lance tutors. Ali said some really nice words on our behalf and about us too, with a great response from the crowd, which was really heartwarming.

I quickly typed out a message to the team who were, at the time, commuting to a workshop in Evanston, Illinois providing the keynote address to the Illinois Youth Services Institute on the amazing benefits of play. Playwork in Other Contexts, in action!

I had message back from the team. They had just pulled up on the banks of Lake Michigan and celebrated with a happy dance in the sun. Gathering together pebbles from the beach, Morgan and Zan instantly thanked the world for their support with a rocky thank you. 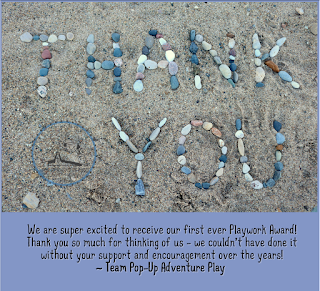 Advocating for children’s play can be a lonely battle and at Pop-Up we have long been seeking to spread the Playwork message to the loneliest parts of the world. This award means a lot to us. For us it provides the supportive encouragement that our efforts are worthwhile, but it also reminds us that however hard and lonely it is out there, the playwork family is just a wobbly video feed away.