She ran straight past me and launched her 14-month-old self up the playground slide. This is not the first time she has done this, but apparently the excitement and freefall of going down the slide wasn’t quite enough so ever since she could walk, all she’s wanted to do was go up the slide. Every time before today, she would go slow, take a few steps up and upon working out how steep it was, she would look around for support. Her little hands would grab hold of a big pair of hands and without breaking eye contact with the top of the slide, she would be assisted to the top.

This time was different though. This time, she went fast. She got further up the slide than usual, grabbing onto the sides with both of her tiny hands. To me, she seem to suspend in the air in slow motion for a minute, gripping onto the slide like Spiderman. But she didn’t look around for help like usual, so I didn’t offer any. I stood right next to her with my arms ready but she didn’t want them. And then slowly slowly, like she was melting, she pitched forward made contact with the slide, and chubby-cheeks-first she slid down slowly on her face. She looked up at the slide when she got to the bottom and blinked, like nothing had happened. Then she looked around, grabbed both my hands and proceeded to the top of the slide just like every other day.

Taking my hands in his, he steered me towards the shoe rack. He wasn’t walking independently yet but his little personality was – in his mind he was standing tall and walking fast! He knew what he wanted and he was going to get it. So we made our way to the shoe rack and he stood happily holding it as he patted everything down, like you do when you are 11 months old. After maybe a minute or so, I offered my hand to him for further wanderings but he batted me away, so I sat down on the floor and watched him pat stuff.

Maybe another couple of minutes passed and I experimentally grabbed both his little hands to see if he wanted to go and pat something else, but his little feet refused to move (I have no idea how such a small person can refuse to move, but it happened) so I sat back on the floor and watched him gleefully pat everything again. Not long after that he looked round at me, satisfied and I offered him my hand. He took it and then guided me to a new location, happy that he had done what he needed to and was off to do the next Very Important Thing.

I’ve been spending a fair amount of time with my niblings (group term for nieces and nephews) recently, getting to grips with the idea that I’m both an Auntie and a playworker at the same time. I am gradually realising something: when I am looking after these tiny little people, the thing I am basically doing is meeting their needs. They are before words so they cannot communicate their thoughts, so we have to learn to read the signs. There is a cry for “I’m tired”, and a sign for “I’m hungry”, two basic needs outlined by Maslow that says we must meet to achieve a good foundation for happiness. Babies have a third sign too, the one I’m good at identifying – a cue to play. I’m well practiced at this one and even though my niblings are miniature, they are still people and I am familiar with what it looks like when we want to play.

In any play space, I am quietly observing children to see how best I can meet their needs so that they can play. I have prompted children to go to the bathroom (“This will be right here when you get back”) because their pee-dance is getting in the way of whatever self-directed play frame they are involved with. Back in my playranger days, I would often have to bring hot cocoa to my play sessions because it was so cold and rainy that the children were not able to comfortably be themselves and play. On more than one occasion, I have quietly produced a facial tissue next to a runny nose without them really realising where it came from, so they they could continue playing without leaving to deal with a pesky situation.

So really, being a playworking auntie is very similar to… just being a playworker. At least it is right now when they are both before words and their biggest priority in the day is to explore the world. I wonder what will happen when they begin to talk! I look forward to this next big step for my little niblings. 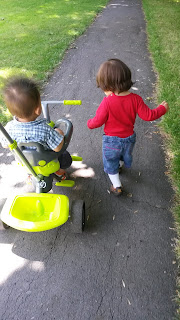 This is part of the Playworking Auntie Series. To read more from Pop-Ups Zan, please visit her personal blog. You can find more about us on Facebook.