Sara left an urgent message on our guest book a couple of weeks ago when she found out that she was helping to run a Pop-Up Adventure Playground for Hopscotch CD festival. She had never heard of Pop-Ups before and needed a little help. After we talked through the process on Skype and provided her some hints and tips for the day and she was away! We’re really thankful that Sara took some time out to reflect on her day for us.

At the end of the day huge boxes were scattered across the park. It looked like a village of cardboard boxes draped with wild fabric and scraps of wrapping paper. There were markers and bags littered about the lawn It was a mess. All clear signs the 2014 Pop-Up Adventure Playground was a success. 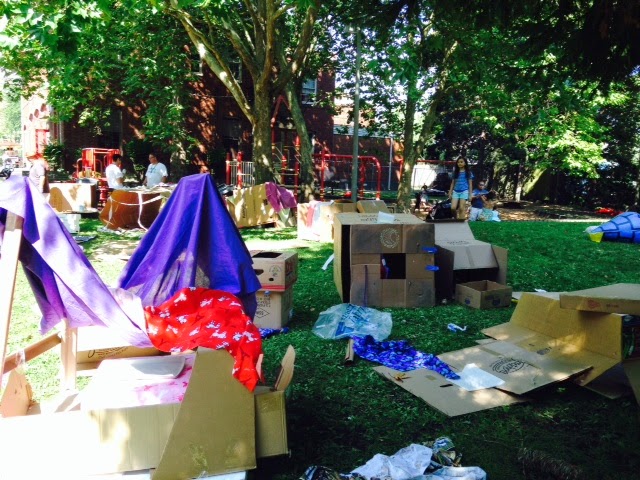 The Playground was one of many featured events at the second annual Hopscotch CD festival. The festival’s focal point was a nearly 3 mile long hopscotch track. Volunteers had spent the previous days painting sidewalks with chalk. The sidewalks ran along streets lined with homes and businesses in Seattle’s Central District neighbourhood. Along the way hop scotchers and walkers could stop at the myriad of lemonade stands and yard sales lining the path.

A few librarians from the public library towed cart-loads of books by bike to set up an open-air library. The sisters who lead the “Girl Talk Walk,” which encourages women to walk for exercise, were recruiting new members. Toward the end of the path was a final hopscotch course where neighbors attempted, but unfortunately did not succeed, in setting the world record for the most hopscotchers on a single course. It was in an adjacent park where kids could creatively build houses, tanks, and spaceships in the Pop-up Adventure Playground. 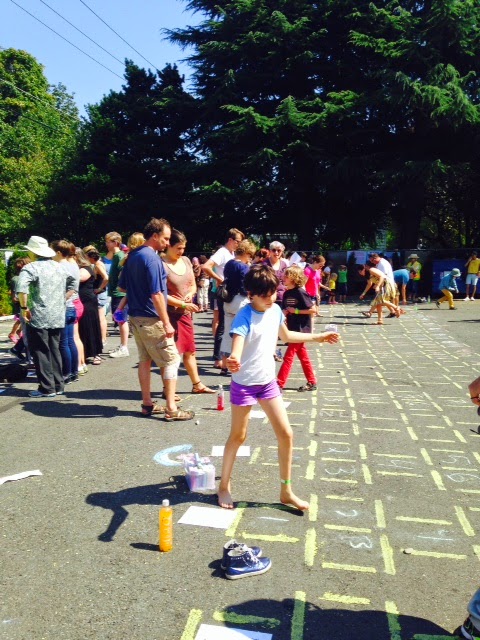 Children began showing up around noon. The other adult volunteers and I donned goofy hats to help make us recognizable. I was concerned a nearby air-filled bouncy house would be more attractive to kids than a bunch of old boxes, cardboard tubes and yards of fabric. I was wrong.

Initially, kids were curious but reluctant to interact. Two other volunteers and myself invited them in by asking if a big cardboard refrigerator box looked like a house or perhaps a school. The kids would gradually warm to the idea and within a few minutes they were grabbing boxes and tubes then rummaging through boxes of wrapping paper, paper bags, markers, chalk, cardboard packaging, butcher paper, fabric and other various household goods from the junk drawer. They dug and searched until they found just the right building materials. They thoughtfully constructed buildings and art projects. Some spent a few hours elaborating on their works. Occasionally they would petition an adult to cut cardboard or cloth or tape materials together. 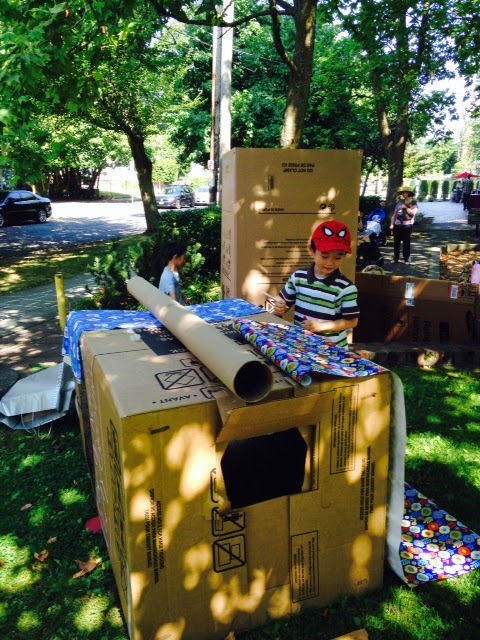 At the end of the day, as we deconstructed the buildings for the recycle bin, it was as if we were uncovering a wonderful archaeological site. We were delighted to discover the kids had used big pieces of chalk to color the “ceilings” and “walls.” In one room a child had written “cocina,” Spanish for kitchen, on the wall. 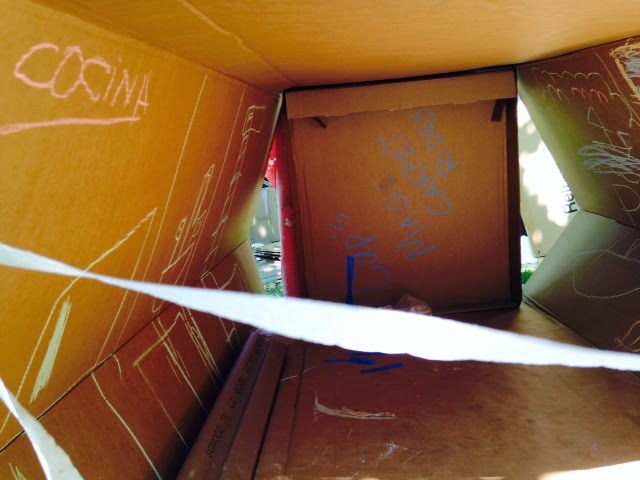 The Playground was a great success. As we cleaned up we realized next time we should include more cardboard tubes from the carpet store, paper towels and wrapping paper. We also realized it was good to have adult assistants standing by. Sometimes the young architects needed to be shown how to rip painters tape or help to find the right building material.

Another wonderful outcome was getting to chat with parents. We seem to get wrapped up in our lives and not get a chance to simply chat for no reason with our neighbours.

The Pop-Up Adventure Playground will definitely be a part of next year’s Hopscotch CD event  – and the neighbourhood’s third attempt to set the world hopscotching record.

To run your very own Pop-Up Adventure Playground, get in touch with us on Facebook, Twitter or on our website – we can run you through the whole process and provide you with helpful hints and tips!