Erica came to us with her background in Landscape Architecture hoping to take more of a playwork approach to her work. Pop-Ups Morgan has been her Playworker Development Course tutor since January, and was able to meet her at the adventure playground on Governors Island this Summer. She came and spent the whole day, perching on tires to scribble notes, and sitting with us in the shade of an enormous tree to watch the clouds pass overhead. Here are some thoughts from her first-ever pop-up adventure playground.

I’m a student again. I spent 12 years as an environmental educator and can whip up a hands-on, place-based unit on structures in a couple of hours. I can align it to the state curriculum and then coach teachers as they integrate the lessons into their literacy units. But can I step back and observe a child building a cardboard structure, without offering advice?

I’m three years into a master’s of landscape architecture at the Boston Architectural College, and four modules into the Playworker Development Course. In July, I got to combine design thinking and playwork training by running my first pop-up adventure playground in South Boston’s Joe Moakley Park. I was nervous, but one boy’s bossiness helped lessen my apprehension. 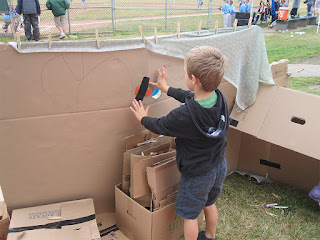 This boy, about six years old, arrived at the site and immediately set up a cardboard wall, asked me to cut a hole, and made two arrows pointing to the hole. He said that would make it easier for people to find. 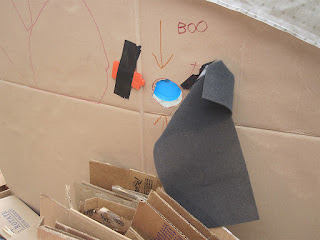 He went behind the fabric on the other side and asked for more tape. He used a container lid to cover the hole from his side. After a few moments, I decided to knock on the wall. Sure enough, he lifted the lid and passed a clothespin to me, telling me to pass him something in return. As we continued the game, I relaxed a little. 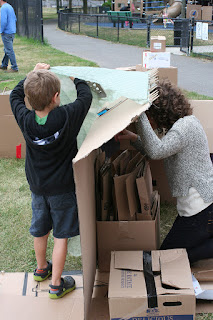 For days I had fretted over having enough materials, fitting everything into the van, having too many kids join the pop-up, having too few kids join the pop-up, dealing with sceptical parents, or intervening too much in children’s play. As this boy-shopkeeper directed me through a play frame, I felt like the student who is delighted to find the test only includes fill-in-the-blank questions, not short answers. It wasn’t that I hadn’t studied the material; it was that, for the first time that day, I felt confident that things were going well.

We had more than enough materials and saw children use the materials for creative, exploratory, and dramatic play. It took me a while, but I got over my frustration that we weren’t attracting more kids. (“Why are they playing with footballs and going down the slide? Don’t they know how much more FUN this is?”) At one point, ten boys were playing with sports equipment, and six girls were playing in the adventure playground, and I was concerned the boys wouldn’t come over because they’d perceive the pop-up as “for girls.” The boys didn’t come over, but that was their choice. I was lucky to have Chenine Peloquin, a fellow playworker-in-training, helping with the pop-up. We discussed why kids gravitate towards what they’re familiar with, especially in a new setting. The site was all the better for offering many play opportunities. 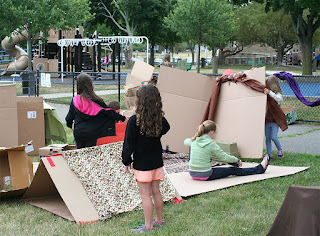 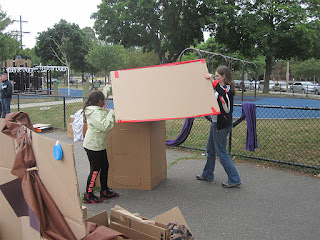 My recent professional and academic work in landscape architecture have focused on environments for play. I’m using a play lens, but I’m also using a design lens to create spaces that offer more freedom for children. Moakley Park, which is more than 60 acres, is nearly all sports fields, with two playgrounds and one seldom-used street hockey court. The park sits on the coast and will need to be redesigned for resilience to sea-level rise and increasingly strong storms. It is my hope that new park features such as hills and stormwater channels will be playable, and that designers will consider how children play in the landscape, not just on equipment. We hope to blend play, memory, and design to influence park planning. Meanwhile, I’ll continue to practice stepping back and letting children play.

To host your very own pop-up adventure playground, register to do so online. Jump onto our Playworker Development Course and join Erica in the quest for more playwork knowledge, email suzanna@popupadventureplay.org today!