David is one of Pop-Up Adventure Play’s wonderful Playworker Development Course tutors. First as Pop-Ups Zan’s PhD friend and now as a colleague, David has been working hard to take playwork into hospitals using his specialism as a trained nurse. In celebration of Playday 2016, we hosted a Pop-Up with Children’s Scrapstore Salford and we asked David to volunteer for us for the day. Here’s how he got on.

This is my first ever blog about my first ever Pop-Up Adventure Playground. I must confess that I was a bit nervous as to what to expect and to what my involvement and role would be. However, there was nothing to worry about as I was in the expert hands of Team Pop-Up led by Suzanna Law!

I did have a little panic when Suzanna said to me before any children had arrived and we were just setting up to go and make something! I haven’t made anything in years, especially now being an academic who just reads and writes!

But after the initial confusion and embarrassment at not knowing what to do, Suzanna and the crew take action. I must confess I was quite impressed by my boat creation. It became even more impressive when some of the first children to arrive came over, climbed in and took it over. They know what it was, too. 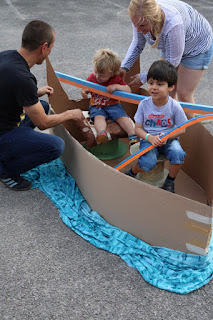 As a tutor on the Playworker Development Course, I of course know the theory of Pop-Ups, but to actually see one in action was amazing. I must confess I was a little bit nerdy in identifying the different parts of the play cycle in action and loose parts and all the other theory that we know so well. But seeing it put into practice brought it all to life.

The buzz of activity and the happiness on the faces of the children and their parents was a joy to see. The children from the very youngest to the older children play in dens and houses. Plus, children rolling around inside cardboard drums. There was even a drumming session going on which brings a new dimension to the event. A manikin’s arms, hands and legs proved a firm favourite with the children, with different body parts being incorporated into their play.

It was both surprisingly exhausting, but a most amazing experience. If you haven’t taken part in one yet, would I recommend it? A resounding Yes!  I am hoping that Suzanna will invite me back again to volunteer soon.