By Zan
It’s been some time since I’ve lead on a project and worked directly with children. The last time I did, it was as part of the Queen’s Jubilee, and in video-game-years that was an age ago!
Today I get to excitedly talk about my two-day Pop-Up Adventure Playground at the Co-operative Academy in Manchester, a new build secondary school with community outreach as a priority. A perfect match up with Pop-Up’s own goals too, so we decided to go in and do some serious playing. Here’s some images from the two day Pop-Up. 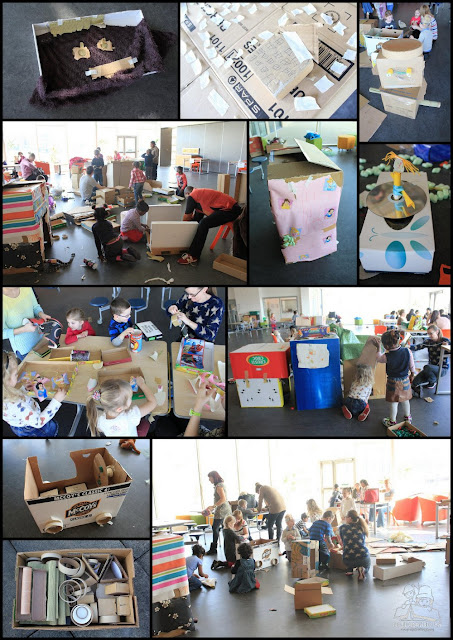 I love to watch play evolve, and during the two days of play, there was one particular evolution that I was particularly interested in. It was all about a box. 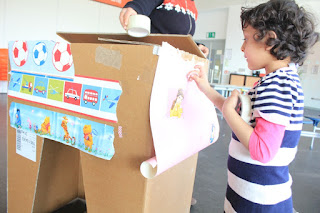 This young lady was my first participant of the day. She chatted with me and waited patiently until all the rest of the older boys and girls went off to do their organised activities, and then she selected this box and decided that it was high time that it was wallpapered. We’ll call her Su. 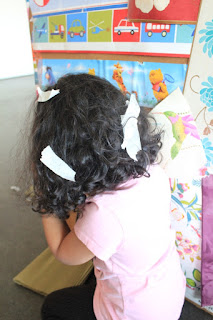 This is her very good friend. Together, they wallpapered the box inside and out. Sadly the tape I provided didn’t stick very well to boxes, but very well to hair. 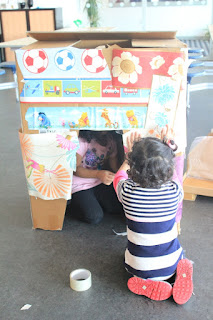 Su and her friend really liked their box, and spent a long time inside and out, asking for help whenever the paper was too curly for them to manage and stick at the same time. 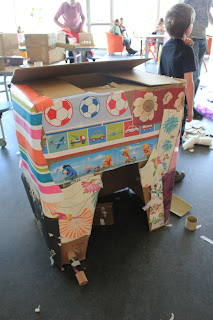 At the end of day one, they had done a pretty good job. Looks really good. 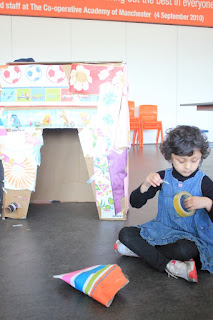 I was super excited to see Su on day two. She was just as keen as she was the day before to adopt the box and have it to herself. And for some reason, all of the other children knew that and left her with it. 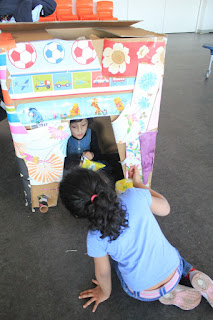 Su’s friend came too, and they ate all of their lunch hanging out in the box. 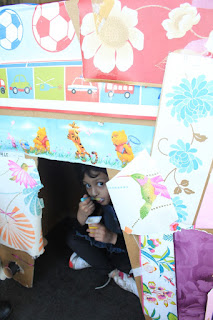 When Su’s mum told her she couldn’t eat her yoghurt in her house because it was too far away, Su decided that the best solution was to move the house. There she is, peeking out of the box with her yoghurt, and her mum laughing quietly to herself about the inventiveness of her daughter. 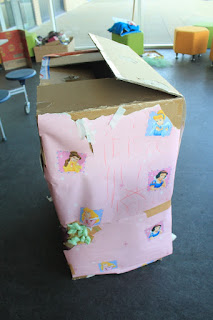 Trouble happened when Su’s brother wanted to play but Su didn’t. She said that it was a girl’s only house but I said her brother didn’t know so he was trying to move in too. Very soon after, Su wrote a message on her house “It is a girls house”. That will tell him. Soon after that, Su and her friend left to go to the park. 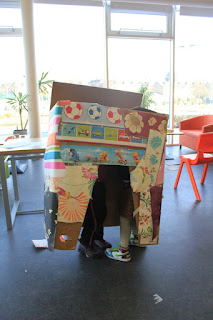 But that wasn’t the end of the box. Another two girls adopted the box briefly and walked around in the playspace with it on their head. It was a wonderful and hilarious sight.
I really love watching children play and following their play journeys. It was really good to come back to it after all this time. I really love my job, and look forward to being back on the frontline of playwork and getting my hands mucky again very soon! 🙂
For more about the Pop-Up Adventure Playground at the Co-op Academy, please visit Zan’s blog. To find where the next Pop-Up will be, please visit our Facebook page.