After a series of unfortunate mechanical happenings, were arrived in London ON from Ottawa ON, just before midnight. We were kindly greeted by Alan, our local contact and play advocate who had started a conversation about this very visit many months ago.

Our landing in London, Ontario didn’t just come about by chance, it was through the combined efforts of community partners from 7 organisations including London Children’s Museum, London Public Library, City of London Recreation, Childreach, London Children’s Connection and The Makerbus and carefully pulled together by Alan in his continued pursuit to incorporate more adventurous opportunities for children across London.

We kicked off our time with a workshop for almost 70 enthusiastic practitioners, professionals and parents from all over the city.  They willfully engaged on a warm Monday evening. They shared their stories, laughed at our terrible jokes and engaged in some energetic, slightly competitive playful scrambling. 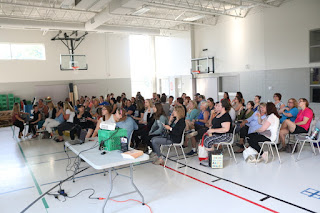 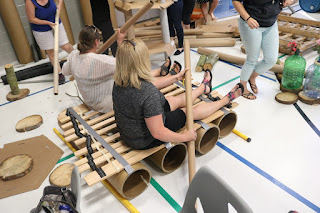 Once again, it was amazing to hear about the initiatives people were trying, the barriers they had faced and the mischievous tactics they had employed to get around them. People everywhere are keen to reap the benefits and instinctively work towards making it happen.

The following day, we slotted into a highly ordered operation to provide a pop-up adventure playground for almost 500 summer camp children which was later followed by a public event for children and their families in the late afternoon.

The children came, some charged, others observed in bewilderment, but each and every one of them found their place and did their thing. Camp leaders toyed with their usual practices and took a step-back while others engaged in their own play, creating moving vehicles and livable spaces. During the evening session, families were engaged, some more so than others, but eventually most adults worked out their place. This often meant taking a step back, with less hands and words and more eyes and listening. 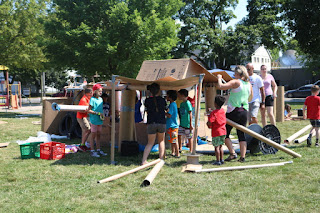 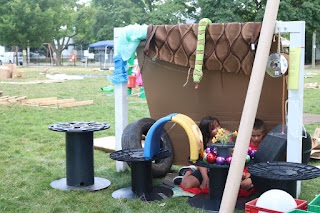 Children dangled from trees while some adults winced in their shadows. These adults observed our reactions as playworkers, and logged our every move! Many made time to follow up to ask why we did, or didn’t intervene. They shared their emotions and reflected on their reservations. Mostly agreeing that their own anxieties and fears were not a good enough reason to teach, or intervene.

During the pop-up session, I was engaged in a conversation with Sally, the Community Centre leader of many decades and she kindly shared her stories as a camp leader and community organiser. In spite of her extensive background and her wealth of knowledge, she was still genuinely, taken aback and surprised at how effective these events were. The simple idea of giving children the time, space and permission to just do whatever they wanted, and being there to help guide that process further was like a breath of fresh air.

Our time in London concluded with a small gathering of like-minded playful folk around a BBQ. We chatted Playwork, PhD’s and Mounties. We talked about our adventures and others shared their own. We exchanged email addresses and deer whistles before a departing conversation about how, in just a few days, they felt we were already part of them, part of their small playful family, which was both heart-warming and mutual.

To hear more from our Canadian tour, check out our blogposts from stops 1 and 2. For more about our work check out Facebook and Twitter.