Pop-Ups on Tour 2015 – A Workshop in Queensland

I am writing on another place, from seat 26F gazing out on the rust-red earth far below. We are somewhere in the air between Brisbane and Perth – Justine, Suzanna and myself all in a row.

Our last workshop and pop-up were in a town called Robina. Whispering Gully Childcare had invited us in, only a week after they’d had Marc Armitage in, to talk about the play cycle and low-interventionist styles. In playwork and on tour, we build on human relationships and work together to make changes that are larger than ourselves. We are always standing on the shoulders of giants, but in Robina we were lucky also to be in the footsteps of friends.

“We loved hearing Marc speak,” one said. “And I’ve been intervening less, but it’s hard! Sometimes I hear myself start to say these things I said for years and then…” She slapped her hand across her mouth, and friends on either side giggled in recognition. The site is shifting from a more traditional educator-child approach to one explicitly playwork-inspired, and the teachers who’d worked there for years have been suddenly faced with a lot of new ideas. How to balance these big questions of freedom, responsibility, opportunity and trust? How to explain all this to the parents?

“Yes,” Suzanna said. “It is hard, especially at first. Good playwork is never easy, but that’s where reflection comes in.” The teachers nodded and told us how strange it was to feel less needed than before, and how inspiring it was to see what children came up with, what they were all capable of. They shared stories of children’s prowess, achievements, and humour. Then, we thought there’d been enough talking and that it was time to do some playing instead. 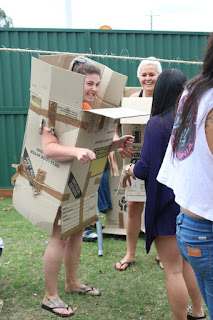 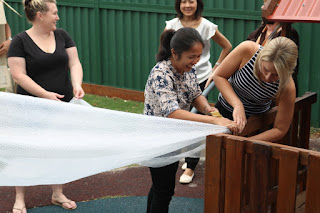 We’d put cardboard boxes, tape and string in the children’s playground and clapped our hands at them, saying “get up, go on! Get outside already. Go play!” They looked a little horrified at first (as most are, to find that a Sunday morning workshop contains audience participation) but quickly got into it. When we called ‘five minutes left!’ we heard a chorus of ‘no’s’ echo around the site, full of plaintive Australian diphthong. 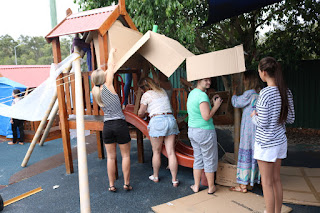 “I’d only just got into it!” one participant said as she carried her box back inside. We explained that bellowing at them was deliberate.

“I felt a bit of pressure there, to be honest” a woman in the reflection afterwards. “Like you expected something of me and I wasn’t sure what.”

“Same,” said another. “And it was really interrupting when you shouted at the end!”

“Yes,” Suzanna and I said. “That’s why we do it with you, so you can see what it feels like for children.”

Learning about playwork involves a lot of deep thinking, a lot of acknowledging feelings and talking about them. All this is inspiring but is also hard, and that’s why I was so glad to spot the staff not only playing at the community pop-up afterwards – but playing with their new vocabulary.

One colleague opened her plastic water bottle for a sip, looked at it for a moment and then splashed a little on her friend, who looked startled.

The splasher laughed again, then dropped her water bottle in favour of a bucket.

“Yeah?” she said, “Well, I’ll annihilate you,” and soaked her friend head-to-foot.

To read more from Morgan, visit her personal blog. To see more from our tour around the world, visit our Facebook page or follow #PopUpsWorldTour2015.