When Pop-Ups friend Louise found out that we were going to Hong Kong as part of our #PopUpsWorldTour2015, she got in touch immediately to ask us where we would be. She came to have lunch with us before our Saturday Pop-Up and stuck around to see all the action. Here is a lovely piece that she’s kindly guest written for us.

I had the pleasure of attending the Pop-Up Adventure Playground event in Hong Kong during the World Tour. I am a School Psychologist who suddenly and unexpectedly had the opportunity to teach English in Mainland China for a few years. In the spirit of adventure play, I said, “Why not.”

The Pop-Up event was a delight and a success. As the kids began to trickle in they tentatively explored and initially used the materials to recreate familiar games of turn taking and competition – how I see kids in China play most often. They took turns throwing lids in a box, set up a game (I think parent initiated) of bowling with bottles and cans, and tried re-creating other well-known games. But as the freedom of the place, the skill of Suzanna and Morgan, and the relaxation of parents took hold, their play became more creative, exploratory, and cooperative. The competitive games waned and materials were continually being transformed from one thing to another. 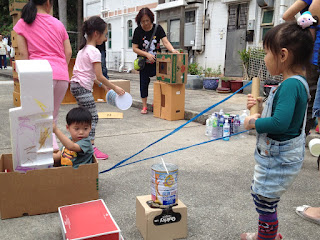 It was a perfect venue for observing the developmental differences of play (take note teachers of child development!). The toddlers explored materials and the phenomenon of in, out, putting together and taking apart. They also watched the older kids intently, and then tried to mimic what they saw. Preschooler play incorporated more pretend – the box that became a vehicle, pretend food and cooking – but also included coloring on surfaces they have never before colored on like a big mattress, pieces of Styrofoam, boxes, and the ground. The school age kids organized each other into more focused pretend play such as kitchen/restaurant, and created new games of turn taking and competition with the materials. 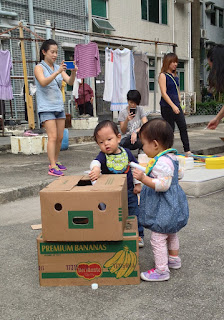 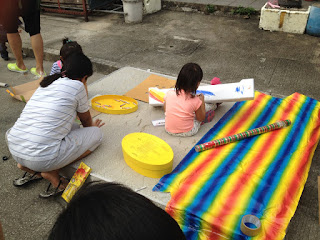 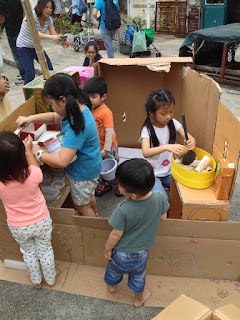 The parents and other adults (aunts and uncles) were also a joy to watch. It was like someone unlocked a long dormant child within. Many got better at watching the cues from their kids (and Suzanna and Morgan) and found unobtrusive ways to support the play. My favorites were the adults that got so involved in their own creations they seemed to forget that anyone else was around. 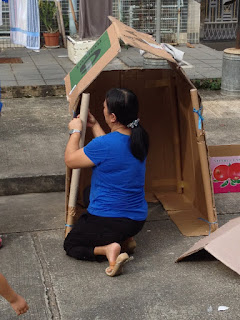 Then there were the skills of Morgan and Suzanna. They gave just the right set up task to adults who weren’t quite sure what this “adventure play stuff” was all about. By the time the kids arrived, those adults were already hooked. Suzanna and Morgan skillfully redirected aggressive play, expanded the play of younger kids, and modelled to adults. 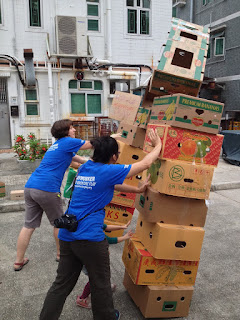 The whole event remained busy and flowing with activity. No tears until the end and clean up had started. It confirmed to me yet again what we know about kids and play: 1. All kids play no matter where they are from, 2.  There are developmental stages to play, 3. Given the opportunity kids find creative, cooperative and intricate ways to play, 4. Kids learn best by doing, exploring and experimenting, 5. It is difficult for parents to back off from “teaching” mode, but they can.

To read more about our adventure around the world, please visit our special tour page. To see more up-to-date information about our day to day adventures, join us on our facebook page. To be part of our next big adventure, please email suzanna@popupadventureplay.org.