Pop-Ups On Tour 2017: An Awesome Start in Canada

Well, we’ve had an awesome start to the tour.

First, you marvellous individuals brought us over the line of our crowdfunding goal.  One person was a particular friend to Pop-Ups, and we’d like to thank Queenie for her incredible generosity.  Now we can sleep indoors and eat in cafes, instead of the car-camping, dumpster-diving trip we’d feared (mostly joking).

We’ve also completed our first tour stop of Halifax, Nova Scotia, which included two workshops and one pop-up adventure playground.  In Halifax Central Library and The Pavilion on Halifax South Common, we met local parks and recreation staff, parents, paediatricians and other play advocates, to talk about the play, risk and adventure.  The pop-up had a fantastic turnout – we estimated 300 people – and people stayed for ages to construct cars from cable reels, capes from yellow silk and, of course, forts from cardboard boxes. 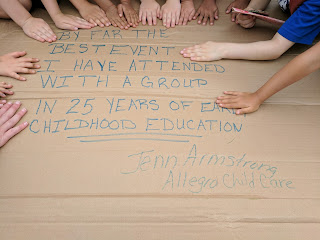 All of this is thanks to the tireless and extraordinary efforts of Alex Smith, aka Mr Playgroundology and now the founder of CanadaPlays. He worked with local organizations, promoted these events on blogs and even appeared on TV! Since 2010, he’s been sharing images of inspirational places to play, and we couldn’t be happier that his neighbourhood was the first stop on our cross-country map.

Plus, he makes the most amazing scallops.

There was a moment in the risk workshop that has stayed with us in the days since.  We always try to include time for participants to play, but when we tell them to get up, a look of fear crosses many faces.  As soon as we utter the words “audience participation”, we can see them think, “oh no”. But after a few minutes, they act as children do. Some take time to warm up, while others throw themselves in. There’s a rising buzz of activity as some hang swings from the rafters and develop complex games, while others gather handfuls of materials and find a quiet corner all their own. 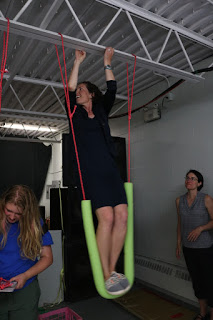 When we all come back together they seem refreshed, laughing with their neighbours and swaggering back to their seats. They seem relaxed in their bodies and sprawl across the plastic chairs. Often, they’re holding hats made of bottle caps or mobiles held together with zip ties.

“This is for my daughter,” one might say.  Or “my husband will laugh to see this.” But we know who it’s really for, and that’s what makes it beautiful.

Seeing their joy, hearing Alex’s raucous laughter, watching the faces of children absolutely absorbed in their play – all this has fueled us, for the next stages of our own journey. 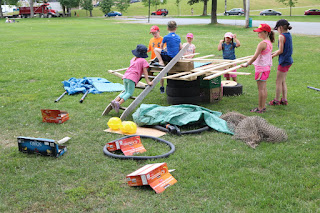 Next stop, Montreal! We will be hosting an informal screening of The Land and popping up too! If you’re in the area – come join us!