At pop-up adventure playgrounds, we get to meet children in public space. Nowadays, that means meeting them within the circle of their parents and caregivers.

When we’re supporting play, we sometimes get a peek into a child’s world or the world of their family. And when we’re talking about play with those family adults, we often speak about other things as well – freedom, time, community, memory, hope.  This can be frustrating sometimes, beautiful at others.  Little moments stick in the mind.

In East Vancouver, we held a pop-up in partnership with our new friend Keeping. He seemed a bit anxious at first, wanting to check whether he’d got enough stuff, the right materials.

“Is this how they normally look?” He asked. We assured him that each one is different and yes, this one is going well. The children will make it work. He began to relax into the process, and together we watched people use the wonderful loose parts he had gathered – an enormous collection of fridge boxes, ribbon in curls that caught the breeze, tires painted silver and gold.

I later found out that Keeping had initially created a registration and waiver system, and had been able to abandon the notion because it seemed as though everything was going fine and no one seemed concerned about risk or injury.  He seemed surprised and pleased. 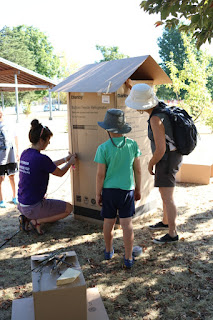 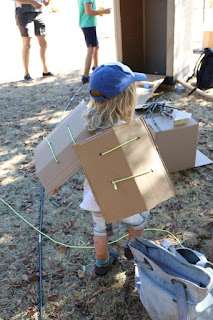 When I walked the site, I visited different family play frames.  In one corner, a tall grandfather ran up and asked me to “come and cut a door for us”.  I pulled the box cutter out of my pocket and followed him, down the slope away from the trees.

“It goes here,” he said, tracing his finger in a square around the front flap.  He pulled it open to show that there was an internal divider to the box that could open and close, and decided that needed a window.  The window he wanted was specific though, and he got frustrated trying to explain.

“Oh, I’ll just show you,” he said and slipped inside the box and around its corner, quick as a fish.  I was surprised, and made eye contact with his two grown daughters.  They were clearly charmed by him, and we all made that facial expression of eyebrows raised, shared smile of isn’t that lovely.  The face that is normally made above the heads of children.

“Right here,” he said from inside the box.

“He’s been talking about this event for weeks,” one of his adult daughters said.
“The kids aren’t even here yet,” said the other.

A few feet away, a child was inside a tall and slender cardboard box and demanding small pieces of tape from his mother.

“How’s it going?” I asked her.  She smiled, rolled her eyes.

“He’s making an outhouse,” she said.  “Crescent window and everything.  But the door opens down, so it feels like a castle, he says.”  She peered in the little window to where he’d placed a smaller box inside with a hole cut out the middle.

“Remember this is just pretend,” she said. 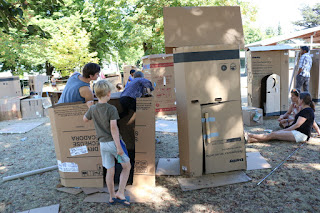 Under the trees, a group of small girls were making a castle. I passed them a purple marker and said that if they drew a window I’d be happy to cut it. One thought for a while and then drew several small round shapes like polka dots on all sides. Her mother started to object on my behalf, saying “I’m sure they could be square” but I knuckled down and cut around each of them carefully, following the wobbly lines. The girl nodded solemnly when I was finished, and I moved along.

Sometimes we find ourselves invited further in. One father approached with a loop of string in his hands, asking me to cut them for a handle. He brought me over to the box where his son was busy going in and out the little door.

“Do you think this will work?” he asked. I nodded and he looked relieved.

He began to tell me about his own father, and the experience of their building together. “I tried to help him but it was difficult. I was small and could not do things correctly. He would tell me so.”

We stood for a while in the face of this memory. I’ve heard many fond memories from parents of cardboard boxes, their regrets and fears that their children might not have those memories of their own. I had not yet heard from someone for whom this was their specific trauma, reformed.  He spoke again.

“I do not want to be like my father, so…” He looked over at his own son, absorbed in moving small strips of tape from one hand to the next. “I am careful. I try to remember that this is his own.”

And he took the tape from me, and he smiled.