For our 17th stop we were invited to the small towns of Foremost and Bow Island in the Forty Mile Region. This stop was brought together by Terri-Lynn and Corinna from FCSS who had been following our Canadian tour and asked us to bring our Pop-Up Adventure Playground model to them.

We arrived at a large open school field to our usual homing signal of loose parts and we set to work. We had the typical boxes and tyres combined with pans and utensils. Fabric and duct tape mixed up with dried beans and pool noodles. Terri-Lynn soon arrived towing a horse box carrying additional supplies, coffee and cheesy snacks – the full complement of playwork necessities!

The session in Foremost was delivered in conjunction with Foremost School which had an impressive catchment radius of around 50 miles! Some of the children in attendance embark on a daily commute of over an hour each way to get to school, some coming as far as the US border, near the state of Montana!

The recess bell rang, the children arrived and they played hard. Echoes of “This is AWESOME!” could be heard as loose parts were negotiated, squirreling and hoarded between groups. Some joined forces to build forts, others made complex vehicles whilst others sought what they needed in a simple pile of beans. 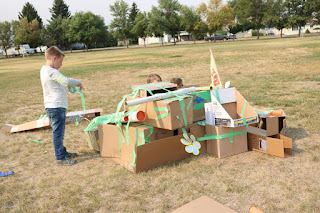 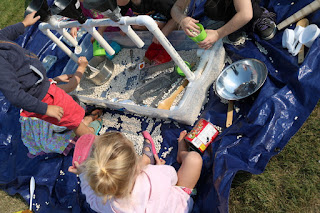 As the bell rang to declare the end of recess, children swarmed asking “Can we keep this?” “How about this?!” “Even this?!” – At the same time the skies quickly started to change from a bright blue to a deep red as the smoke from neighbouring wildfires moved in. The wind picked up too sending ribbon and crepe paper streaming across the fields 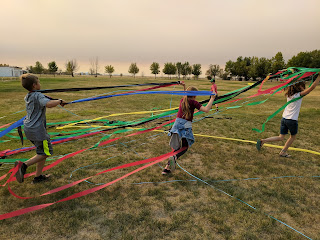 We quickly scrambled and packed up the site. We each handed piles of loose parts to Suzanna who was occupying the back of the horse-box. She stacked and meticulously organised the space, ensuring that everything could fit and would be easily accessible for our second event later that day. After a short stop for lunch and being gifted a home-grown cantaloupe from a curious local, we headed back on the dusty roads to the second stop, Bow Island.

We arrived at Centennial Park where children were already playing with the loose parts as they were being taken out of the back of the horse-box. Some local parents were keen to help with the set up and others brought a table of a snacks, drinks and hot-dogs! 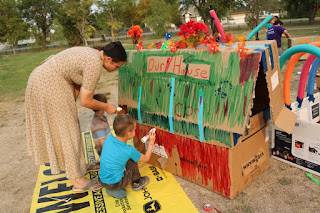 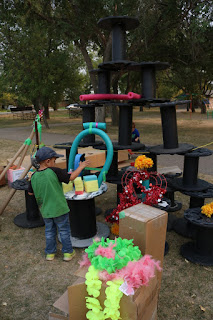 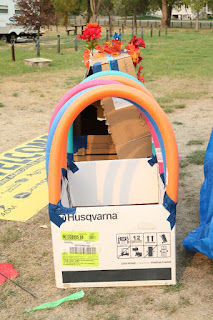 The session proceeded naturally, forts were built from cardboard, towers from milk crates and the beans reappeared with second wind of neophiliac quality. During the session I was incorporated into a couple of different play frames. At one point I was the “tester” horse for a prototype carriage made from a wooden reel, rope and pool noodles and later I was draped in a glittery shawl and paraded as a princess, to which I was very quickly abandoned in full attire.

Local parents were keen to learn more, many asking great questions about intervention and risk. We discussed how by providing recycled and everyday materials made it much easier to say yes. Some adults just needed their own playtime. I heard two of the mums hysterically laughing as they pranced around in a bra made of duct tape. No purpose or goal. Just for fun. Just because they could.

As the sun started to settle and the children emerged from their play, there was an overwhelming, tranquil feeling of success. Parents, organisers and children alike left carrying their careful creations, full of enthusiasm for when the next event would be held. 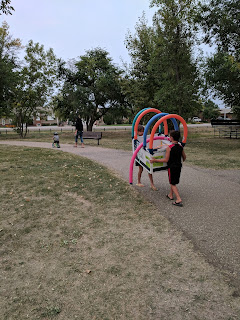 Thank you for inviting us to FCSS. Above all, we had a great day, we met some amazing people and felt welcomed in your community. Keep going.

This was stop number 17 of our 18 stop tour – if you want to find out more about how it went, check out our dedicated tour page. For more from us check out our Facebook, Twitter.