We were told to park at the Rec Center opposite Safeway supermarket and wait for the boat to come.

The Lake in the Woods – aka Kenora, Ontario – is a vast aquatic wilderness of densely wooded islands, navigated by small boats with outboard motors, silent canoes and the occasional tourist cruiser. We were headed for Town Island and the B’nai Brith campsite where a small group of children from Youth Agencies Alliance were staying for the week. Beneath our metal bench seats on the boat, we’d stuffed a collection of materials. Cardboard, held together with duct tape. A milk crate filled with gifts from Englehart, ON.

When we arrived they showed us to our cabin, and the field where we’d be popping up in the morning. This group was older than our usual crowd – aged between 11 to 16 – and came from different locations within the Winnipeg region. Lise has invited us to come, and told everyone that “some people from far away are coming, and we’re going to play”.

They didn’t seem to be entirely sure what that might mean.

The next day, we dragged out our small collection of loose parts and scavenged lots more from the various storage sheds. A bag of empty plastic bottles, some rope and about a million milk crates. People began arriving, drifting in as their other scheduled activities finished.

“Is this the adventure?”

“Is this the playground?”

“Yes,” we said. “You can do whatever you like here, with anything you can find.”

The first group built a table from milk crates and dealt out the card game Hearts.

“That table’s too small,” a member of staff said quietly. I assured her that they would figure it out and, sure enough, when their group grew they added an extension. More children arrived and started making places to sit and hang out, while others dug out a soccer ball and started a pick-up game that eventually stretched from 7 participants to about 30, and back again.

“Are there really no rules?” one girl asked me. I recalled Penny Wilson’s line, and said “try not to hurt yourself or anyone else, but that’s it.” She nodded, and went to join a clapping game that kept collapsing into laughter. Rain began to fall, and one group huddled under an umbrella. Others dragged a tarp over poles made of milk crates and laughed every time it fell over.

We watched with pleasure as the teenagers navigated the space in their own time. Some members of staff had expressed concern that ‘these kids’ wouldn’t be able to handle freedom, that there would be fights or strife, but it was an incredibly laid-back session. The staff began to relax too, stepping further back and watching the young people ease into their bodies and the landscape.

Towards the end, a tall staircase of milk crates developed. Friends dared one another to climb higher on the wobbly towers, which others held upright. They discussed whether 6 was too high, or if they could make it to 8. One wobbled the tower he held deliberately, and his friend told him off from above. Lise was beside us, and possibly beside herself with pleasure. She pointed out which young people usually didn’t engage in activities and here were shining, which ones had laughed today more often than she’d seen all week. Another member of staff was starting to panic at the risk he saw the children engage in, and Lise talked him through their process. I handed him a football-shaped stress toy I’d found, and he smiled a little wryly but stood squeezing it for the next 15 minutes. 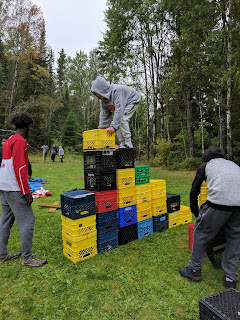 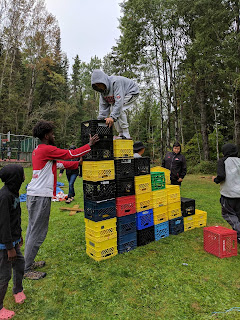 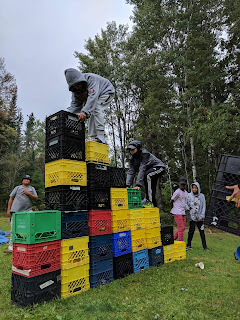 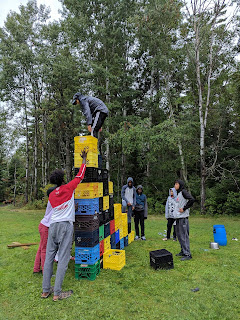 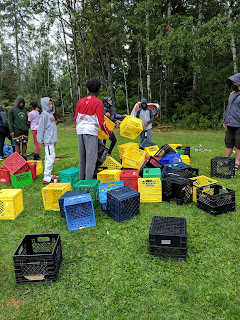 “This is exactly what we wanted,” she said. Every pop-up is what the children need it to be, and this one was relaxed and convivial. Sometimes, they’re coincidentally what we need them to be as well.

To read more from Pop-Ups Morgan, check out her personal blog. You can also find out more about our daily play thoughts on Facebook and Twitter.