The Pop-Up Adventure Play team has met and played with literally thousands of people, from coast to coast, in big cities and small towns, on mountains and in prairies, in parks and schools and lecture halls, with new friends and people we’ve spoken with online for years.

“You’ll have seen more of Canada than most Canadians,” at least 50 people told us. While we didn’t want to agree, the scale of our trip did feel astonishing.

Here’s a reel of some highlights from 16 pop-up adventure playgrounds we helped to host, put together by the illustrious Suzanna Law.

After such an exhilarating run, it seemed right to have our last pop-up at the International Play Association Conference in Calgary, 13th-16th September.

Calgary’s Mobile Adventure Playground unit helped with materials and staffing – we were so pleased to meet members of their team!  Together we set out materials in a corner of Olympic Plaza and watched as two classes of school children arrived.  It was cold and rainy but they didn’t seem to care. Instead, they ran in and found rolls of crepe paper, long poles and plastic tubes. Teachers and conference participants stood in a line along the curved pavement path to watch, their arms crossed against the cold until I went along and nudged them out of formation with rolls of tape and a little light teasing.

One material was the star of this show.  Of course, children played a million and eight different ways but every so often one kind of play will shape or carry the session in a particular way.  This time, it was in the combination of a metal-framed canopy and dozens of rolls of tape. Masking tape. Duct tape. String, crepe paper. Packing tape.

MORE TAPE was the cry from all corners at once. Children wrapped tape around the structure’s legs, putting themselves on the inside of a sticky fortress.  One child wrapped a tree in tape, while others ran from tree to canopy leg to adult’s leg and back again. The tape went around the legs of adults and was used in tugs of war that dragged across the site. The world was wrapped in tape. Then people got the idea to break it. 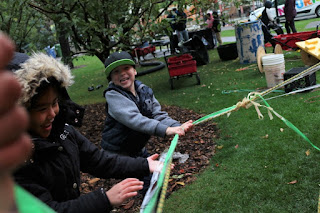 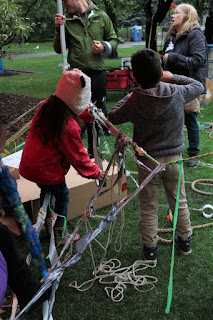 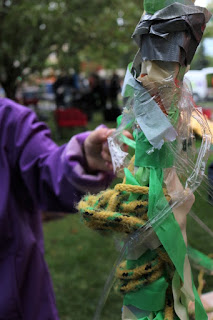 Children used sticks and cardboard tubes. They shouted things at the tape and tried to karate chop it with their hands until the whole thing bounced, all four legs bound together and skidding on the flagstones. One side shuddered down, as tape pushed in the button holding its extension. We rushed over, Andy and Suzanna and Ricky and myself, to each hold a leg. We put one foot on the small metal plate and held the pole at about hip height. When one side crashed, we lifted it up again. When children smashed at the tape by us, we solemnly nodded encouragement. Mostly, we watched the whole scene around us unfold and then made eye contact, smiling.

“Well, I guess we’ve worked out what the minimum number of people on a playwork team should be”, Suzanna said. I asked her to take a picture of this moment, for when we next wanted to illustrate supporting a play frame. 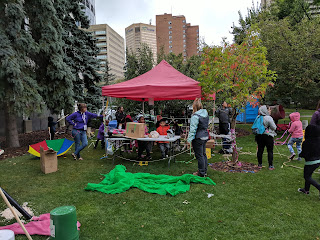 Eventually, the tape was smashed. The children went home.  We cut the rest with scissors and box knives, then rolled tires and cable reels back into the van, and picked a thousand white beans out of the grass. Suzanna made an enormous tape ball, we said our goodbyes and promised to reconnect with other conference attendees back in the warm.

A couple of days later at the conference centre, we shared stories and images from the past two months. Looking out across the audience we saw so many familiar faces, including Diane Kashin – one of our hosts from earlier on in the tour and Queenie Tan – our biggest sponsor for the tour! People wanted to see the evidence of what we’d done together, to hear what other folks were currently doing to support free play in Canada, and to meet others who were passionate about the same. It was humbling to see them all attend our workshop, but we knew ultimately that they were putting in the hard work.

After travelling all those miles and meeting almost 3,000 people, Suzanna was a little stumped for right words to conclude our last workshop with. She wanted to express gratitude to each host for their generosity, to share the humility she felt for every participant. Above all else she wanted to explain how important every person was that we had met, and their role in Canada’s future of play. Even if these things are hard to say, we hoped they got the message anyway.

Our tour is complete! To hear about how we got on, check out our dedicated website. For daily thoughts from us, please visit our Facebook or Twitter!