We drove along a paved path that curved up through the Kortright Centre for Conservation. We parked and walked in, past a grove of tall slender trees. Boxes and saucepans had been set up between them, a length of string and squares of fabric. There was enough of a clearing that the air was brighter there, illuminating a patch of recently abandoned reordering.  To our right, more loose parts were scattered like leaves beneath the trees. Adults moved through the space carefully, some taking pictures, others speaking quietly. Some were there for the workshop in an hour, others part of EarthDay Canada who were hosting the pop-up adventure playground. 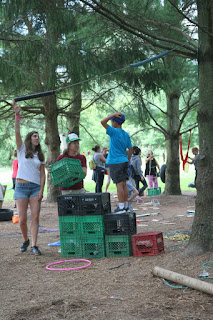 We’d spent the morning with EarthDay Canada, talking about the programs that they’ve been running and the connections between play and a love of nature. We talked about working with schools and communities, scaling up and the specifics of practice specific to playwork and its implementation. And eating croissants. It was a meeting about possibility, about what’s been done so far and what might come next. A lovely start to a day of play.

That evening, we spoke for about an hour on rethinking risk and play. Diane Kashin had invited us in, and helped spread the word through the York Region Nature Collaborative. People shared their play memories and we told playwork stories. Then we watched The Land, and reconvened for a Q&A.

There are some questions that come up every time we show this short film. It’s an extraordinary way of reaching people, opening them up to rich conversations about freedom, rights, what a duty of care to children might really mean. There are a couple of scenes that inspire questions about gender and exclusion, whether children are replicating the sexism they’ve seen or processing it, and whether that’s ours to say. When it seemed like that was where conversation was headed, I referenced one of the key scenes that often made people uncomfortable.

Suzanna put her hand out and said, ‘No, Morgan. This time they laughed.”

I looked out across the auditorium full of people who’d seen the humor in that moment, the humor the child had felt. They grinned at my surprise. One woman put up her hand and said that she’d also seen the film in Ithaca, where the audience reaction was very different. She explained that the room’s response had colored her own perception each time and I wondered what a difference framing a film like this can make, and how we go about changing opinions one room full of people at a time.

I swung around and stared at the audience, who then laughed good-naturedly at me.  As soon as we think we know how something will go, play has a way of twisting out of our expectations.  It reminds us not to fall into the complacency of thinking we know what will come next, and lets us be delighted by surprises – and then, to keep learning together.

To find out more about our tour, visit our posts about Halifax NS, Montreal QC, London ON and Blenheim ON. For daily thoughts on play come join us on Facebook and Twitter, and check out our website www.popupadventureplay.org