By Ricky Tsang, Board Member of Pop-Up Adventure Play

It was a warm evening in Vancouver and I had just been picked up in the little yellow tour car (with a surprising amount of leg room) and I was heading into the little known space of playwork. This was an adventure that I never thought that I’d have the chance to do, but as one of Pop-Up Adventure Play’s Board Members, I was here and it was great!

For the first few nights, Pop-Ups contacts Zeke and his wife Erica had graciously put me up to help me get over my jet lag and ease me into tour life. He also drove us around to see the amazing sights in and around Vancouver while eating oysters, learning about inukshuks and admiring the natural beauty; it didn’t feel like 8 years since the last time we spoke! I will definitely be back!

But between the sightseeing tours in Vancouver, I wholeheartedly threw myself into playwork and it was super fun. My first pop-up adventure playground was in Richmond with a Chinese-based community. It was great to see the children explore their play with cardboard boxes and a ton of forts, some built by the children and others with some help from me and the playworkers; I made my first “window” which was part of a fort designed by a kid who even built a shoe rack. 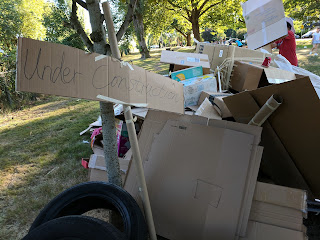 Our next stop was in Coquitlam, where the Pop-Up Adventure Play team sat on a panel alongside renowned Professors Dr. Mariana Brussoni and Helen Little following a screening of The Land and Project Wild Thing. The short movies were well received by the audience and I gained an insight into the mindset of the education community in adopting a playwork framework in BC. Fascinating stuff! I also got first hand experience in seeing how the team hold their own in situations where they are considered experts in the field (even though they won’t admit it). And they nailed it.

Next, we ventured into Surrey to support a pop-up adventure playground for children around the age of 5 years. It was great to experience how children of younger ages play in their own way; they may not be able to build forts but, boy, can they play. We also had a runner! But he knew where the fun was and promptly returned. In the evening the same guys hosted a workshop where Zan, Morgan and Andy delivered an interactive workshop in playwork and also another showing of The Land. The participants were receptive of the playwork ideals and we had some good discussions, especially regarding some of the local barriers that they have experienced to date. 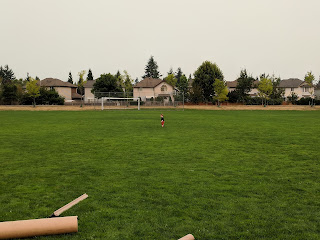 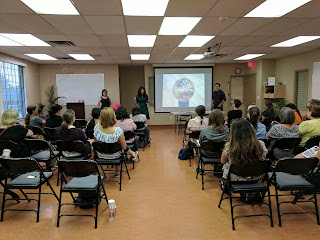 That was our last stop of business in BC before we moved on towards Calgary, Alberta. Along the way we stopped off at Hope, Salmon Arm and Golden, some of the most literal place names I have ever come across! We eventually arrived in Banff National Park where it was cold and wet but that didn’t stop us from exploring the village and Lake Louise, among some of the most incredible views I have seen.

After settling into Calgary, we had an early start as the team were invited to speak at a workshop hosted by Calgary Child’s Play along with Kirsty Wilson from Scrapstore PlayPods and Robyn Monro-Miller from the IPA. This workshop featured different approaches to child-directed play and had the participants thinking about how they can support play in their own communities including the use of Playpods and understanding how we can promote the children’s right to play.

We then ventured into 40 Mile county to the villages of Foremost and Bow Island (after a brief trip to see the incredible valleys at the Dinosaur Provincial Park). This was a very different experience to Vancouver and Calgary, to see the vast open prairies and experience life away from the urban developments. Despite these lifestyle differences, the children played all the same. Forts and castles and streamers everywhere! One particular moment that stood out for me was at first, there was a natural boy/girl divide with their own castles and their own rules. But after negotiations and bit of back and forth, they merged their castles to create one huge castle with multiple rooms! It was pretty awesome. Another moment that caught my attention was when a young boy who was very attached to his mother eventually discovered his instinct for play – the proud look in his mother’s eyes was priceless. This situation came about because of how Morgan handled the situation, from engaging with the child and allowing him to discover his instinct for play – I’m pretty sure tears were *almost* shed! Finally, Andy was also threw himself into play – by becoming the children’s mannequin, draped in a sparkly shawl and feathery scarf – I’m pretty sure he was enjoying himself! 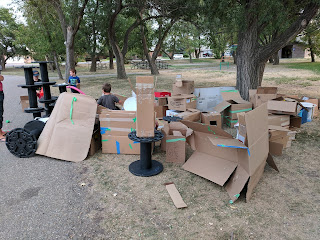 Overall, this Canadian tour was an incredible experience for me and with everyone that I met along the way, I could tell that this was also a great experience for them. We are grateful for every host that invited us into the community, and every workshop participant who came along to hear the team speak on play – such a fundamental need in life. To be able to provide children with space and materials to play their own way was clearly something that everyone valued. The hope is that our presence was enough to continue the conversation of play in Canada and provide the tools to ensure that children have that freedom to play their own way, every day.