Popping Up in the Community 2018: Morgan

For more years than I can tally, I’ve moved too often to have a neighbourhood of my own. I’ve circled Southern Vermont since 1999, but only recently planted roots. This winter was my first time hosting a pop-up as a local resident.

I talk (and talk!) about community, about making change where you are and claiming public space for play. A large part of my work is encouraging people to venture out, into their own neighbourhoods, with nothing but a bunch of scrap and an idea, based on my experiences Play Ranging (so I knew it was legit), but there is something fundamentally different about doing this in the place where you live.

For one thing, it can be a lot more embarrassing.

Starting off at the library

The library was a logical place to begin. Firstly, I love my library. I love all libraries, but this one is particularly good and a non-small part of why I moved here. The programming director, Anne Dempsey, was so enthusiastic when we met and totally got it about play. We decided on the front lawn as a location, and chatted about which materials might be a good match for changeable March weather. She arranged to promote the event on the town’s only movie screen before the Friday feature, and her press release graced the cover of our local newspaper.

I showed up that Saturday morning with the steadfast vehicle crammed with bags of assorted junk, including pool noodles liberated from Erin Davis’s barn. The snow itself was one day old, light but packable – much like that kinetic sand, if you kept it in the freezer.

At this point, I would like to quote the letter of support Anne Dempsey wrote for me after the event.

“From her tiny yellow car, Morgan pulled out colorful hats, mixing bowls, pool noodles, a pink flamingo, a small tarp with two ropes, some wooden spoons, and spray bottles filled with colored water. She placed everything on the snowy patch of grass. At first, nothing happened. No one came.”

Now, I’ve spent many an afternoon while ranging or with pop-ups, sheltering deep under my hood in the rain without any children for miles. But there is something very different about that: when all the people going past are folks you’ll be seeing the next day while getting coffee, and the day after that at the supermarket. I had a clear and definite feeling of failure, of humiliation. A couple of friends said they’d try to pop by and, like a bad party, I didn’t know whether to hope they showed up or didn’t.

Then, something shifted and I remembered the Actual Point of all this. It wasn’t to display my work, or make an abstract statement. It was supposed to be about allowing more play to happen, which meant that if I enjoyed myself the day was automatically a success.

Back to Anne’s letter:

“So, Morgan began spritzing the snow with colored water. She drew a hopscotch board on the sidewalk nearby. She invited people coming into and out of the library to join in the fun. At first, people looked embarrassed and maybe felt a little bad for her. After all, it seemed like a crazy thing to do. But people came around. A toddler and her father drew chalk marks on the sidewalk and scooped snow into a mixing bowl with a wooden bowl. A retired guidance counselor made a miniature snowman and squirted two spots on its head for eyes. Two children dueled with the pool noodles. A boy scooped up snow with a mixing bowl to build a snow fort. His best friend stopped by. They buried a toy alligator under the snowy floor of the fort. A child climbed up the trunk of the maple tree with the help of a rope tied further up. Morgan helped a child extend a tarp between the tree and the park bench. It made a good shelter!” 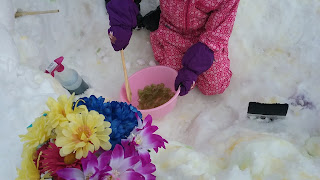 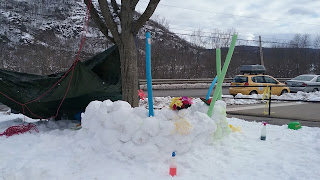 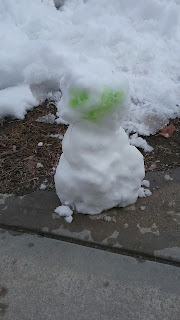 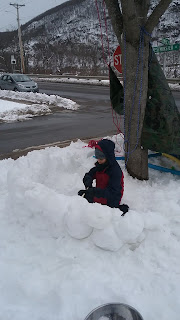 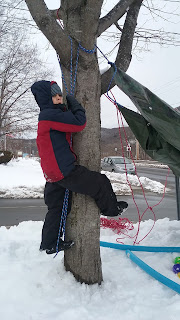 At its heart, a pop-up adventure playground is a tiny celebration of weirdness. When you host one, you’re saying “look what a person can do here” and inviting others to join in. There is so much more potential for joy in the world than we usually allow ourselves to see.

This means that it’s no wonder that this feels different, in that corner where we actually live.