“…what I find particularly attractive about storytelling is that no one has to teach us how to tell a story. It is a way we make sense of our experiences. It is inclusive and open to all playworkers irrespective of their setting, previous experiences or education. It reduces the gap between the theorists and practitioners, seeing all of us as having important stories to tell as storytellers in our own right.” ~ Jackie Jeffrey, “Storytelling and the reflective playworker” in Foundations of Playwork

The look on his face when he entered the room was unforgettable. It was clear that – as a 15 year old – he hadn’t been given the opportunity or permission to follow his own lead for a long time. I handed him a pair of scissors and a whole roll of tape as a bounced gently from one foot to another.

“I really can do whatever I want?”

I smiled, and he didn’t even wait for me to nod before launching himself on the biggest box on the pile. He dragged it to a corner and there he stayed. At a few points, we watched him gently lead his girlfriend to the other side of the hall and mutter at her (“stay here”) before continuing on with his play.

A little while later, he ran over to me to ask for a black pen. I handed him a black marker and “Corey’s Castle” was then christened. On handing me the marker back, he looked at me with a mix of desperation and hope,

Sometimes the stars align, or the universe provides, or whatever phrase you choose to talk about unplanned coincidences working out. My dad had just walked in to the Pop-Up and I knew that he had a big flat piece of cardboard stowed away in his car, so I quickly asked him to bring it in. You should have seen the face of Corey – his castle was complete.

He used language that sounded very much like he was in an examination hall and was pressed for time, and his facial expressions were of focus and resolve. But if you had seen his creation, you would have seen how much he enjoyed himself, how much autonomy he had, and how this was anything but an academic exam. This was a reprieve from all that school stuff that he very much needed. 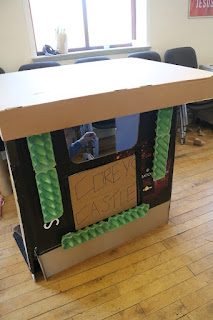 He wielded the frying pan with such fierce joy that I could feel myself flinching at the thought of that kitchen tool hitting someone in the face like in the cartoons. He didn’t hit anyone (or let go, which was the other fear) and asked us politely to throw some plastic balls to him. He was surprisingly accurate and every time the ball hit the pan, there was a pleasing “BOCK”.

He disappeared for a while shortly after that, and the next thing we knew, he was asking us about some beautiful rainbow fabric that he had just discovered amongst the loose parts.

He had created a rainbow “cape” – a beautiful construction of multicoloured strips that were attached to his shirt somehow at the neck behind his head. As he walked, it swished elegantly in the fading sun. It was as if he was two different people. Sometimes we are a frying pan wielding ball hitter, and sometimes we are a rainbow cape wearing king. That’s what the freedom of play offers. 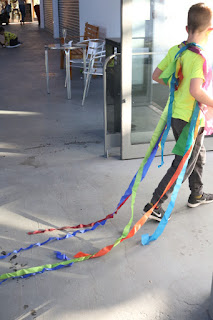 All 2-feet of her was determined to climb the little wall. It didn’t matter that she was in a beautiful flowing dress, that the rest of the children we running on ahead or that that wall really was a little bit too tall for her. No, this was her Everest and she was going to do it her way.

***************
FOUR
I checked for consent in multiple ways. I looked at his face which was still relaxed and smiling. I watched his body language – limited as it was at the time – but he wasn’t struggling or sweating visibly. I also pretended to fix something nearby and muttered quickly under my breath (“Are you okay?”) to which I was given the smallest of nods and an eyebrow raise. He was a willing participant in this play frame.
I guess it’s not every day that you’re given a bunch of tape, and are told that you can do whatever you want with it. And it’s not every day that your brother is available to be taped to a shipping container. I know for a fact that sibling relationships can get complicated, so maybe this was one of those ways to resolve some issues. Or maybe it’s just so much easier to get your brother to agree to something like this than to try and convince someone else that you don’t have a trusting relationship with. Maybe it’s a mix of all of the above and more. All I know is that she had a deep-seated impulse to tape her brother to a shipping container, and he was okay with that. 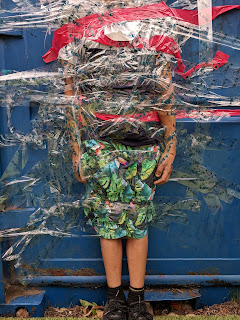 “When I get into this box, will you close the flaps for me?”

“Yes. Just close them,” she said, as she folded herself into the box. I slowly close the flaps, sensing that she wasn’t sure if she wanted this.

“Okay. How about I close one flap?” I fold over one of the larger flaps and she giggles.

“Okay, so how about you close all the flaps and stick some tape on?”

“Are you sure?” I said, taking the roll of tape off my wrist and obviously looking for the loose end.

She paused and looked around. There are other people playing in other ways – a pillow fight was happening at one end of the room, a kitchen was being made elsewhere. A few other people were also getting into boxes.

“Yes, use the tape,” she said to me, with conviction.

“Here we go!” I said, making a song and dance about it to delay it a little for her. Before I stick it on, she giggle-screamed and kicked open the flaps.

“Aww, okay. How about I just close the flaps?”

“Hmm, how about you close the flaps and then stick the tape on loosely?”

“Alrighty, here I go!” I close the flaps and superficially stick down a piece of tape, perpendicular to the opening of the box where the light would be seen from the inside. She giggles, screams again and kicks open the box.

“That was awesome! Can we do it again?” 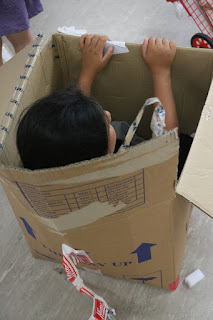 ***************
SIX
The two children did not know each other before this pop-up but were getting on wonderfully. The older needed someone to talk to, to build for, and to show things. The younger wanted someone to follow, to mimic, to be doted upon. It was a perfect relationship, and together, they played for a good couple of hours creating a bathroom complete with a shower, toilet and “place to sleep”. The play was as elaborate as their blossoming playful relationship – it was a joy to watch. 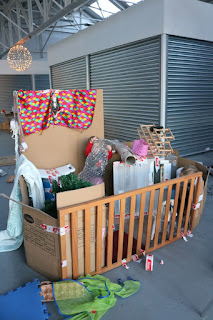 The multi-coloured tiny chairs were stacked in the corner of the room, out of the way. Halfway through the pop-up, I noticed that two little people were diligently and purposefully unstacking them, and placing them carefully in very specific places. Wordlessly, the two little people played with these chairs. Who knows what their narrative could be – were they setting up a cinema? Making a bus? Maybe they each had a different narrative. Maybe they just liked unstacking the chairs.

Sometimes, even with the best intentions and the highest quality loose parts, sometimes children simply can’t resist playing with the objects that are already on site. And why not? They’re still loose parts after all. 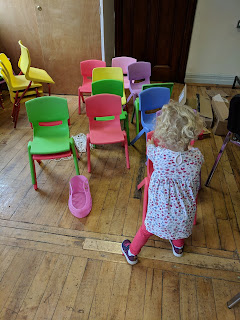 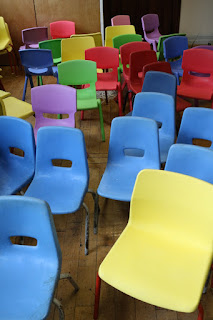