GUEST WRITER: Preparing to Play in the Cone

Nicole approached us a couple of months ago to ask if she could do a Pop-Up Adventure Playground. Before she knew, she had a location and occasion to run one and we talked her through some of the things she would need for it. She kindly agreed to write up some of her thoughts in the run-up to the event for our blog – thanks, Nicole!

We were in the cone. Anyone living in the Gulf Coast of the United States knows exactly what that means at this time of year, it’s hurricane season. Weather maps show the characteristic “cone” shape representing the predicted path of the storm and the areas likely to be impacted. Tropical Storm Erika was tearing across the Caribbean and headed our way, predicted to bring heavy rains just in time for my very first pop-up adventure playground. Seven days out and the map could no longer be ignored, almost the entire state would be affected, it was headed right for us. I was devastated.

Whirlwind to preparing to play in the cone

It had been a whirlwind of preparations for the event. I had met the executive director of a local NGO, the Florida Community Design Center, just the week before he called to invite me to stage the city’s first pop-up adventure playground in conjunction with the groundbreaking ceremony for a local park.  How exciting! What a great opportunity, I thought to myself. I opened my calendar and asked him for the event date. It was in just 4 short weeks.

My heart sank. No materials, no volunteers, and no idea how to pull this off. Yet I commit to it anyway. Did I mention that I have two young children that take up most of my daily awake time? I felt unprepared and overwhelmed.

First, I immediately put a call out to all friends and family to save their recyclables, clean out their closets, and refrain from throwing away anything that a child could possibly play with. I waited, then raided my own recycling bin. I had exactly 3 items- a plastic milk jug and plastic strawberry and mushroom containers. My confidence sank and I frantically emailed Suzanna with Pop-Up Adventure Play.

I’m currently enrolled in the Playworker Development Course and only a quarter of the way through it. Suzanna is my mentor for the course.  She responded immediately and tried her best to put me at ease. She suggested their resource packet. It’s a great place to start and includes lists of things to collect and do in preparation; I love lists! The steps were doable, the materials commonplace. I felt better.

Next, I called my parents!

I arranged for them to watch my two-year-old for three days. Accordingly, I made phone calls. Then, I touched base with friends. Next, I visited the event location.

Over the next few weeks, members of the NGO reached out to help. I drove all over town picking up donations from people. Volunteers surfaced. I bought essential supplies at the dollar store. Before you know it, my garage is full with an amazing collection of fun stuff including:

Things were coming together. I started to get excited.

As the event drew near, I took a look at the forecast and there it was, brewing in the Atlantic, Erika. I couldn’t believe it. I checked the weather channel constantly as I made the last preparations for the pop-up adventure playground. And then, I watched as the storm miraculously began to break up. It dissipated over Cuba, the cone vanished from the weather maps. We had two days of rains and then the morning of the event, the sun came out. It was glorious. The playground looked fantastic and a good time was had by all. 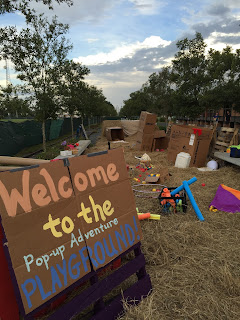 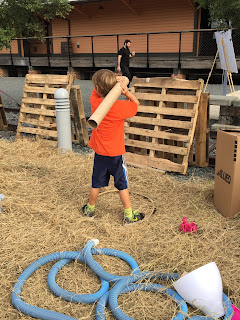 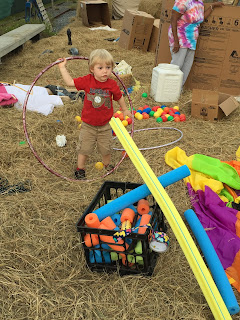 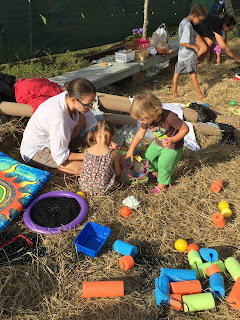 If you’d like to host your own Pop-Up Adventure Playground, download your pack. If you’d like to learn more about our Playworker Development Course, get in touch with suzanna@popupadventureplay.org.