On the 28th of March, Swan Hill celebrated its 6th annual Harmony Day. The children’s activities on the day has always been a highlight for the younger ones. This year would be no exception. Our aim was to allow children to play freely regardless of their age, gender, race and abilities because play does not discriminate and everyone belongs.

After attending a Pop-Up Adventure Play workshop in Swan Hill, a few of us volunteered to deliver a Pop-Up at the event. We knew that we needed lots of boxes. Recycled bins of local white good shops were raided and the boxes stored at our houses and the library. 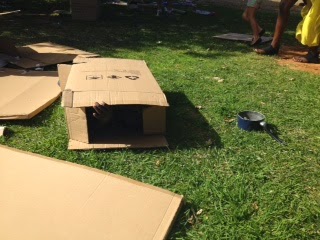 We needed lots of boxes.

A week before, I took my children to the park and tested some of the trees. They passed! During the event, there were about 7 children swinging on the tree at once! 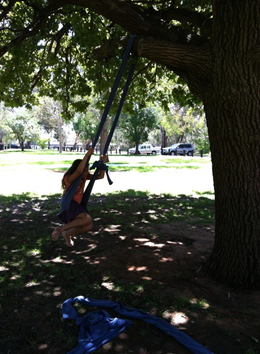 Anna trying out the trees before the event. 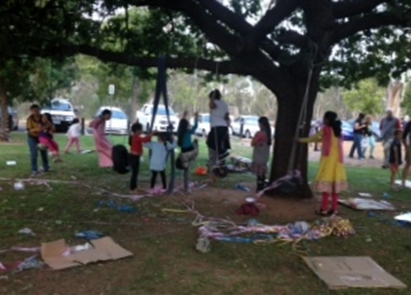 The made up swings during the event.

Many older children were also interested in what was going on. I told them that they could do whatever they wanted with the materials but they were not quite sure if this was true. After rummaging through the boxes, they finally built a small cubby house. 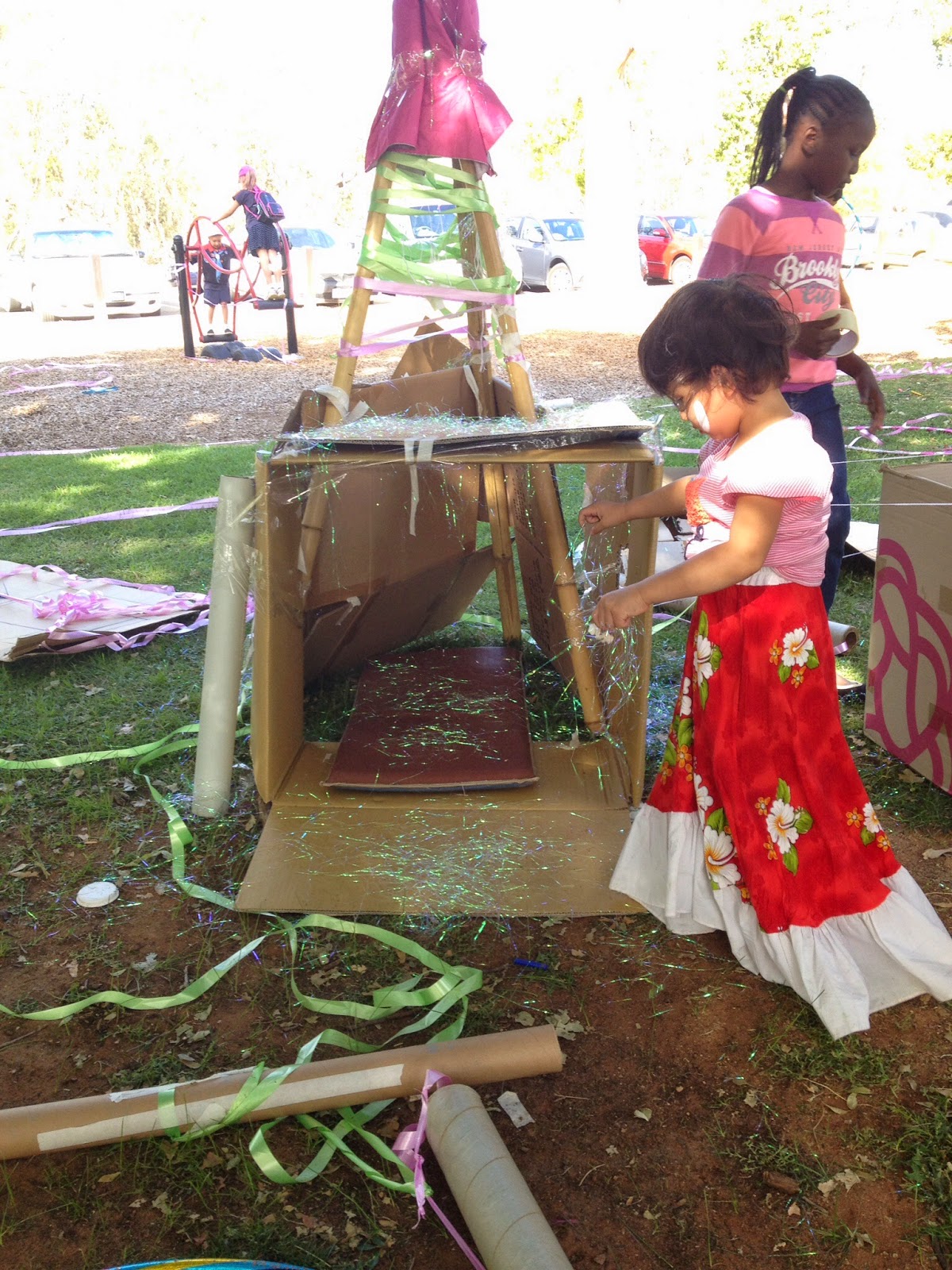 The Cubby house was decorated… 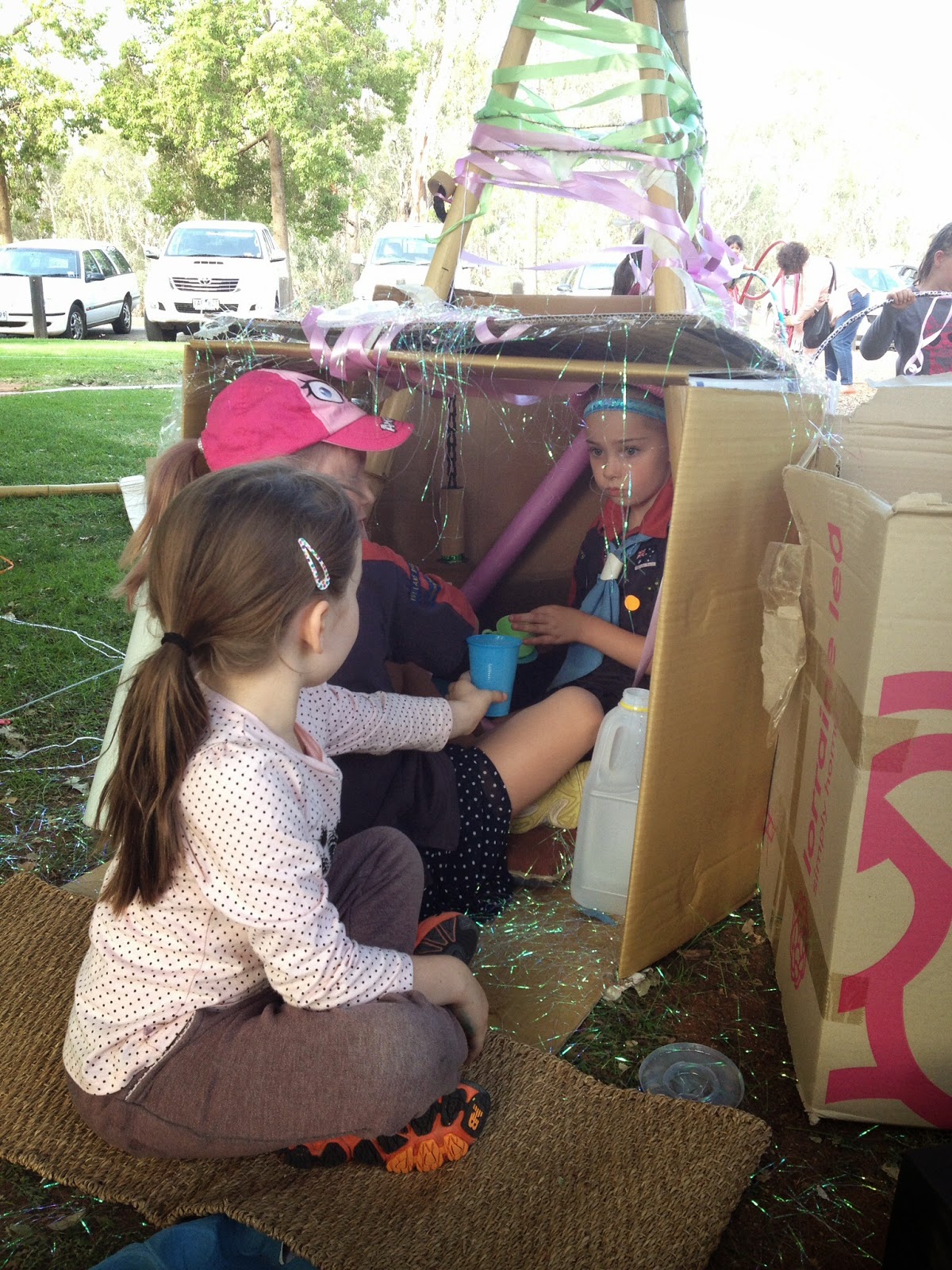 And tea was served.
Adults who accompanied their younger children were also spotted looking for items in the boxes, looking for tape and glue to make their own creation.

One travelling family were very impressed by the mess! Watching their younger child, the father said, “I don’t know what he is doing, but he is making something?” He was intrigued by his son’s concentration and ideas. Another adult told a group of children that their cubby was great. To that they say: “this is a train!”

I observed a young boy who found some yarn on the grass. He rolls it into a ball and decided to tape all around it. Indeed, he makes a ball! He then threw it in the air and caught the ball with a small container. He did it a few times and caught the ball each time.

A younger child looked at me and said “I want to do it”. I suggested that he asked the boy how to make it. “I’ll make one for you,” I heard him say.
There were children pulling old tyres, cooking in the sandpit, sword fighting, drawing. In essence, they play together, talk and laugh: moreover, they’re encouraging each other as well. We found that the materials inspired a real sense of harmony and respect not only between children but also between adults and the children.
On the day we estimated that over 200 children came through our pop-up playground. It was not easy to count all the children. We had some orange sticker dots that we gave everyone who were in the play area and at the end counted the left over.

Before packing up, we approached the children and suggested that they take anything they wanted to continue playing at home. They were overwhelmed by the idea and I felt like Oprah!

We started packing up at around 8pm as night started to fall. We put all the broken boxes in a skip bin and recycled what we could. Many parents and helpers stayed to help us clean up.

During the event, drawing boards and pastels were also used. I brought all the drawings home as I could not think of throwing them out before seeing them. Someone left a message that would summed up the event: “Do what you love, love what you do! Hello… Smile” 🙂 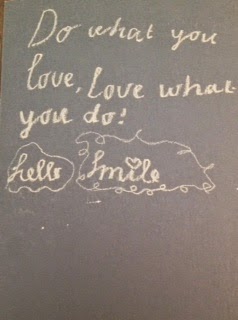 A big thank you to Morgan and Suzanna who gave us an avenue to do just that and to our team members; Brenda, Amy, Rachael, Freshta and Sabira. 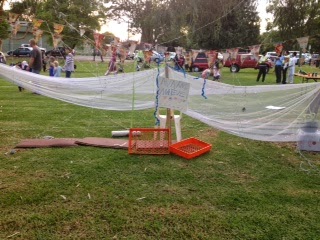 To host your very own Pop-Up Adventure Playground like Joelle and friends, simply fill in our online form, or shoot us an email and we can talk you through the process! To find out more about us, please visit our website.