Last year was a busy year. Not only was I buzzing around the world with Morgan, I was also preparing my heart to have an upgrade in status: I was no longer in the youngest generation within my family. Yes, 2015 was the year that I became an auntie to two adorable little people which I hope to be writing a series of blogposts about.

So some introductions – my little niece is 3 months older than my little nephew. They are both small and both a bit wriggly, and both very happy, busy people. Although right now there are many developmental differences (one is trying to stand, while the other is learning to sit) I can imagine the future being filled with many similar things. They will be in the same school year, they will both develop southern English accents (much posher than mine which is northern) and they will both crave play time in their own way.

On one of the occasions that both of these little people were sitting on my lap (unwillingly, I might add) I realised all of a sudden that I would have to come up with an auntie-ing strategy. There are parenting techniques and guides out there, there’s loads of advice and anecdotal information for grandparents, but no one said anything about aunties and uncles, and there’s definitely not much about them being playworkers too. So it is my hope that through these blogposts, I can talk about my thoughts about being a playworking auntie. I want to share some of the thought processes, struggles and successes that I will have as an auntie, and maybe learn a thing or two by reflecting on my interactions with them. 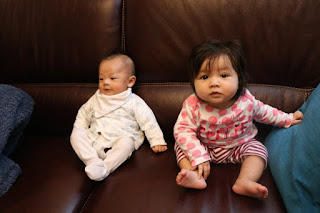 Here are my niblings – my nephew on the left and my niece on the right.
I know I’m going to have many adventures with these two amazing little people. Stay tuned for more thoughts soon!
If you’d like to read more from Pop-Ups Zan, please visit her blog. If you’d like to find out more about play and playwork, visit our website www.popupadventureplay.org.