The first family arrived 10 minutes early at our North Battleford pop-up, and sat on the grassy hill to wait. Workshop participants and staff of BECIP carried out materials from the library basement, armfuls of cardboard, piles of shoe boxes, tubs of tape and string, paint and styrofoam cups. As children and families started to arrive, the participants circulated and tried out the advice we had given them that morning. Circulating, colleagues bumped into each other and compared notes.

“I adulterated!” One said.  “As soon as I said ‘I like your boat’, I thought ohhh.  The look she gave me!”
“I did it too,” her friend commiserated.  “It’s hard to observe and stay quiet, when we’ve always been taught the opposite.”

We assured them that this takes time, and is a process. We distributed tape and cut windows for children who asked. Andy built a swing, Suzanna tried out Facebook Live and we all chatted with the parents. One grandmother, whose two grandchildren were visiting from Edmonton for the weekend, said that she’d been following this event on Facebook for weeks.

“Most folks around here don’t have a lot leftover,” she said. “And it’s hard to know where to take the kids that won’t cost anything, but feels special.  It’s meant a lot to be able to tell them about this, to say that people were coming from far away, and to let them get excited.”

The older boy had finished his first structure and now moved onto a school bus, while his young brother sneaked in the back door and stole a handful of his snack. She smiled at them. “They’ve had a great time.” 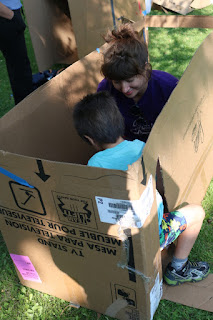 The oldest asked me to hold something for him, to tear off small pieces of tape one at a time. I did that for a while, feeling the sunshine on my face and looking around at the families playing across the grass.  About 200 children came to our 3-hour pop-up, unfolding and stacking, smashing and painting, sticking and pulling apart. I was called away to meet another adult visitor, so handed the boy my roll of tape and excused myself.

“Come back later,” he said.  “When you’re ready to teleport!”

We met people doing amazing work in the Battlefords, supporting families across an astonishing 25,000-kilometre patch. The area north of them is served by aeroplane, since there aren’t any roads there. They told us that parent involvement in children’s play was often an issue – not the helicopter parenting we might expect, but a great distance. Some parents will say it outright, they explained: “I don’t know how to play with my kid.”

At the pop-up, however, they said they saw families interacting in ways they’d never seen before. Some were directing their children’s play, or co-opting it unknowingly, but they were trying.  They were being playful themselves, and that caught the hearts of our hosts.  At dinner, they brainstormed future pop-ups – in a borrowed gym during the long winter, taking the idea up to those rural communities. Several told us that this visit, the simple ideas we’d shared, renewed their enthusiasm to keep working and playing together.  It’s a challenging field, and one afternoon spent laughing makes an enormous difference. 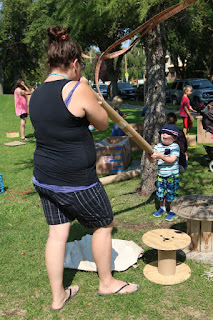 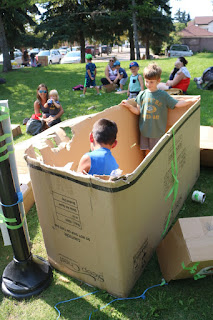 Another woman came up to us in between these sessions. “I worked on an adventure playground in St. Andrews’s,” she told us. Suzanna and I looked at each other, said we’d never heard that there was one. “I was only 16,” she said.  “I had no idea they were so special. It was how I’d grown up, and it was a fun summer job.  But it’s why I went into early childhood, and your talk reminded me of what I loved there.”  By the end, she had decided to get back in touch with old contacts, see when and why that site had closed.

Who knows, perhaps by the next time we’re back a new AP will be flowering in Canada again.

To hear more about our Canadian adventure, please check out our dedicated webpage. To see what we get up to on a daily basis, check our Facebook and Twitter.