This post took a few days to write – partly because we’re officially on tour now (next stop, Costa Rica!) and partly because our last stop was a little overwhelming. Suzanna and I spent 6 hours in a rental car afterwards, discussing detail and processing.

The Ithaca Play Symposium brought together advocates of adventure play from coast to coast, and Canada too. Erica and Jeremiah, of Santa Clarita Valley Adventure Play, kicked off the festivities with updates on their site’s development. Starting with pop-ups, they’ve found a site they love, battled a proposed landfill expansion in their neighbourhood, and put together grant applications for a permanent adventure playground. Tricia O’Connor shared the personal aspects of her pop-ups journey at Lake Erie Adventure Play with United Way’s help, including pictures from our visit to her home and a theme song crooned by her own husband.

They were not the only participants who have had a busy year, or who have persisted despite setbacks. The conference served as a way for organizers to come together, learn a little more about playwork and encourage one another to continue. It was a powerful experience for us, particularly during the afternoon’s dive into larger, harder discussions about the movement itself, its strategy and gaps. Despite our post-conference conversations, those two days in Ithaca survive in my memory as a series of sparkling moments. Here are a few of them for you:

The amount of passion in the room was astonishing, and we were deeply moved to hear so many people reference ‘pop-ups’. As far as we know, we were the first to use that phrase and were humbled to have contributed a phrase that clearly resonates. We met 12 students on our Playworker Development Course, a new record. After 5 years advocating for adventure playgrounds and playwork in the US, we were deeply moved by the response to our work, by the crowd’s curiosity and gratitude. Having sent out so many cues, their return was humbling. 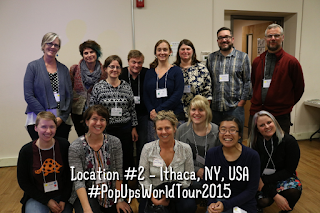 Here are 12 students and 2 tutors, all from our Playworker Development Course! 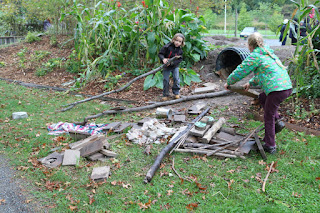 Children on the outskirts of the Ithaca Children’s Garden, playing away from all the adults. 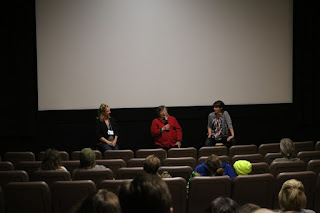 A screening of The Land at the local cinema.

This is a powerful moment in US adventure playground history – one we truly believe is part of a newly rising wave of interest and dedication. All around us, in the plastic chairs and by the coffee machine, people who have emailed for months met for the first time and hugged in celebration.

We couldn’t be more pleased to be a part of this moment, this marvellous movement. It is a time of blooming possibilities, with new sites and organizers springing up everywhere. Whether in the US, UK or on tour, we’re happy to keep on watering.

To read more from Morgan, visit her lovely personal blog. To see more about our tour around the world follow #PopUpsWorldTour2015 or visit our special tour page. For more on Pop-Up Adventure Play visit www.popupadventureplay.org.