We are standing in a circle, facing a fire in the perishing cold. My face is hot and dry while sleet seeps through ill-considered jeans and trickles into my shoes. On a hill, with a steel slide to one side and a view of brick houses and a huge, grey sky. With a belly full of tea and the smell of smoke clinging to my hair and clothes, I can only be at a UK adventure playground. After years away, a trip around the world, it felt a little like coming home. 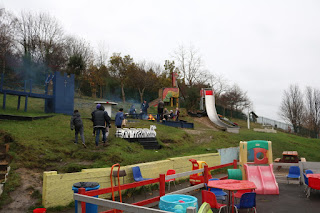 Suzanna and I had been surprised, a couple of months before, when Yanina of Pitsmoor Adventure Playground got in touch with us. The work of Pop-Up Adventure Play is to bring playwork information and support to places left out in the cold – but the UK is where playwork was born! Surely, we said, there was someone more local to call?  But no, she said.  Local cuts had been deep and they were struggling with the same issues we heard all over – troubles in the neighborhood, fears over funding, isolation from other play advocates. In short, a kind of loneliness.

Yes, we said. We would be happy to come. We would be honored to finish the world tour here in the UK, where it all began. Great! They replied. We’ll call it the End of the World Tour, and we laughed at the apocalyptic sound. A good adventure playground, after all, isn’t only made of tea and bonfires, but also a certain bleak sense of humour.

Pitsmoor Adventure Playground is rebuilding itself, gathering up old contacts and new friends to establish a site under its own management. They’ve opened a play association. They’re considering a scrap store. They’re simultaneously putting down strong local roots, and stretching out as far as they can. Suzanna’s visited before but even in the one day I spent there it was obvious how beloved this site is – a sense of love permeates every bump of its hilly landscape.

To most British people our World Tour itinerary sounded faintly hilarious: Ithaca, NY! Costa Rica! Australia! Singapore! Hong Kong! Sheffield! But to playwork students around the world it sounded both appropriate and amazing.  They were impressed that we’d be finishing up at a real adventure playground. This is the kind of site that playworkers in other countries look to for information, inspiration. It’s the kind of site that had been neglected by its home country for far too long.

We did a presentation in the morning and stuck around for lunch and play time afterwards. It wasn’t our usual overview of basic principles and practices. They’d asked specifically to hear more about what was happening in the rest of the world, to have the widest possible context for their own practice. 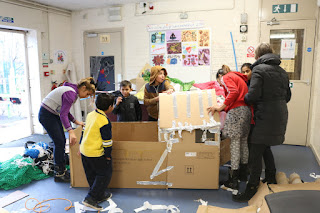 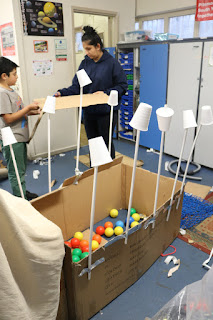 So we showed pictures and told stories.  Playworkers are always telling stories, swapping new ideas and helping each other remember what’s been forgotten.  There’s a moment of humility there, of opening arms and saying “this is what I have seen.  What have you seen?  What can we learn about all of this together?”  It was an afternoon of playworker community, and felt like an exchange – our small way of saying ‘thank you’ for all we’d learned and taken with us on our travels.

To read more from Pop-Ups Morgan, visit her personal blog. To see more photos and stories from our adventures, please visit our facebook page, or follow #PopUpsWorldTour2015.