We stopped at Laurier Heights Out of School Care to meet with our host Sherri, who led us out from the parking lot and into the field behind the school. Loose parts were stacked out there already, waiting.

“I can bring out more,” she said but we assured her that wasn’t necessary, as we went poking through the piles of pallets, cardboard tubes, boxes of tape and rope, and stacks of tires. There were a few surprises tucked in there – most excitingly, a large brassy collection of musical instruments. A saxophone, flute and even one enormous tuba. We immediately picked them up and pretended to play. I made the euphonium produce a loud honking noise, like a plaintive goose, and felt absurdly pleased with myself. Having these instruments to play with seemed marvelous, but wasn’t it also a waste? Sherri assured us that they were going to be thrown out anyway, and that they’d cost more to fix than replace.

That moment of giving ourselves comfort and permission to let go turned out to be important, because as soon as children arrived three of them stripped apart the slide trombone and used the pieces to gleefully stab holes in a cardboard sheet, two at a time. 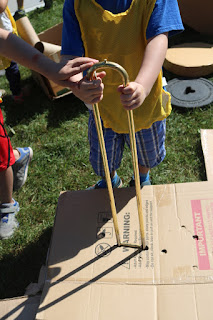 There were a couple areas of destruction going on, including a group of boys at the far end who alternated between building an enormous and complicated den with tearing apart other boxes nearby. A teacher, loitering there and looking anxious, gently touched my arm as I cruised by.

“I think this is okay,” she said. “Tell me why?” So we talked for awhile about play as expression, about the need to explore how materials behave, to let yourself go against a material that can take it, to value destruction and creation equally. We talked about how these ideas applied in our own lives, and how we could apply them to the provision we make for children.

After that, I went back into the session’s flow and saw that a friend of Suzanna’s had arrived. Both were talking while giving small pieces of tape to a child named Emmett, who carefully placed each piece on them. One went on Suzanna’s leg, two on her friend’s hairy shins (he said “oh! Ohhh,” in the tone of an adult succumbing to play) and Emmett giggled after each one. I took over the role of tape dispenser so they could chat, and soon had pieces across my knees and pockets. Later, I was passing back around that larger den at the edge and heard a frustrated cry of “EMMETT!” before the boy himself ran out of there, giggling and chased by an older boy who was covered in a dozen small pieces of tape.

There were some amazing moments, under the bright Laurier Heights sunshine. We always say that every pop-up is a little bit the same (with forts and smashing, running and taping) and a little bit different. For example, this one had a marching band.

Turn up the sound for full effect.

We’d also set up a couple of swings from the fixed goal posts. I’d set up one of those tightly spinning hammocks, and Andy made a tire swing. We put materials to make more nearby, and when Andy went past to cut them down at the end, he found a bunch of those compound knots that children often make and said that some had pieces of flute hanging down. 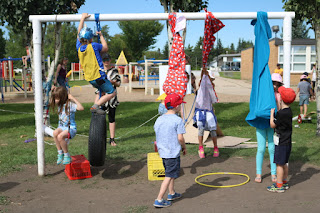 Afterwards, one parent carried her half-asleep child to the car told me, “tomorrow we’re going to rent a trumpet. He was in that fort playing with it the whole time. I’ve never seen him do anything for that long!” And so, a new generation of musicians is born.